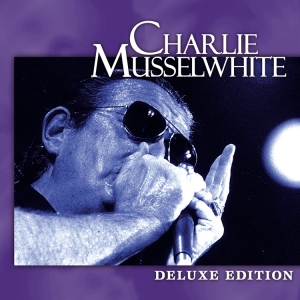 Some musicians become blues players by choice, some are simply born into it. Harmonica master Charlie Musselwhite’s life story reads like a classic blues legend, with roots in the blues heartland of Mississippi and Memphis followed by a migration to Chicago, the birthplace of modern electric blues. His recordings—two dozen solo albums for many labels spanning almost 40 years—have become classics, and his live shows continue to amaze fans around the world. Like the greatest bluesmen before him, Musselwhite has added his own signature to the music. Over the course of his career, he’s introduced jazz chord stylings, Cuban rhythms and contemporary, singer-songwriter lyrics into his vision of the blues.

Musselwhite recorded three critically acclaimed albums for Alligator Records during the 1990s. Deluxe Edition is a collection of highlights from those releases, which are among the strongest of his entire career. Included on the new CD is a previously unreleased track from 1994 and a never-before-available home recording of legendary Memphis Jug Band member Will Shade (Charlie’s first mentor) and Musselwhite from the early 1960s.

Born in Kosciusko, Mississippi on January 31, 1944, Charlie moved to Memphis at an early age and became immersed in the city’s diverse musical culture. He went to school with Tommy Cash (Johnny’s brother), knew Johnny Burnette and went to a few parties hosted by Elvis Presley. He soaked up all the music of Memphis, but it was the blues that grabbed hold of him. At 13, his father gave him his first guitar. After teaching himself a few chords, he was determined to know more. In his teens, he befriended several of Memphis’ legendary traditional bluesmen, including guitarist Furry Lewis and the surviving members of the Memphis Jug Band, most notably Will Shade. Shade took the time to tutor Charlie in the finer points of guitar and harmonica. It wasn’t long before the young musician began sitting in with his more experienced friends, and establishing a name for himself.

But music wasn’t bringing in enough money, so Charlie ran moonshine whiskey from remote country stills into downtown Memphis for $50 a trip. His bosses would distribute it to dozens of drive-in burger joints around town. When the state police followed him home one day, 18-year-old Charlie decided it was time to move on. The next day, he packed up and headed for Chicago.

Musselwhite, already fluent on guitar and harmonica, immediately immersed himself into Chicago’s blues culture while working days as an exterminator and living on the city’s rough and tumble South Side. He hung out and jammed at the famed Maxwell Street Market and in the smoky blues joints on the city’s South and West sides, frequently sitting in with legends like Little Walter, Otis Spann, Muddy Waters and Howlin’ Wolf. He also worked as a band member with Big Joe Williams, J.B. Hutto, Big Walter Horton, Johnny Young, Robert Nighthawk and Floyd Jones. The legendary Big Walter Horton (who was himself a pupil of Will Shade) took Charlie under his wing. Horton’s melodic sound became an integral part of Musselwhite’s style. Musselwhite made his recording debut with Horton on Vanguard’s storied Chicago!/The Blues!/Today! series.

Charlie’s sound was firmly rooted in Memphis and Chicago-style blues, but it was also injected with the energy of rock ‘n’ roll. In the mid-1960s, Charlie, along with fellow harpist Paul Butterfield, found a new audience of young rock fans interested in the honesty and potency of the blues. In 1967, Vanguard Records signed Musselwhite and released the classic album Stand Back! It was one of the first blues albums marketed to the rock audience and became an underground hit across the country, especially in San Francisco. After playing that city’s famed Fillmore Auditorium, Charlie stayed on the West Coast, leading one great band after another, featuring guitar powerhouses like Harvey Mandel, Luther Tucker and Fenton Robinson. Subsequent albums for a variety of labels throughout the 1970s and 1980s kept his profile high and his performance calendar full.

Musselwhite signed with Alligator in 1990 after overcoming his personal battles with alcohol. His label debut, Ace Of Harps, was a true comeback album, and received massive amounts of critical and popular acclaim, including a Grammy Award nomination. Signature, which followed in 1992, reconfirmed Charlie’s position as a world-class bluesman and pushed his music forward with horns and jazz chording. 1994’s In My Time followed, and was hailed as Musselwhite’s most personal and powerful recording. Released on his 50th birthday, the album found Musselwhite recounting his own musical history, with blues and gospel sounds from Mississippi, Memphis and Chicago, and a guest appearance by The Blind Boys of Alabama. A few songs even feature Musselwhite on solo guitar. The album received four stars from Rolling Stone, received another Grammy nomination, and elevated his status as a true blues master. He appeared on Saturday Night Live and was the subject of a feature story on CBS Sunday Morning.

Following In My Time, Musselwhite continued to tour heavily and record groundbreaking albums for various labels through the 1990s and early 2000s. Musselwhite remains a critical favorite and is one of the blues’ most well-known and well-liked performers. His most recent recording, Sanctuary (Real World), was celebrated worldwide as a triumph, and features guests Ben Harper and The Blind Boys of Alabama. He’s made guest appearances on albums from John Hammond, John Lee Hooker, Harvey Mandel, Tom Waits, The Blind Boys of Alabama and many others. With Deluxe Edition, fans can revisit the music that helped elevate Charlie to his current position as one of the blues’ greatest living legends, and see for themselves why the San Francisco Chronicle declares, “He’s one of the best, and as a bluesman, he’s as real as they come.”