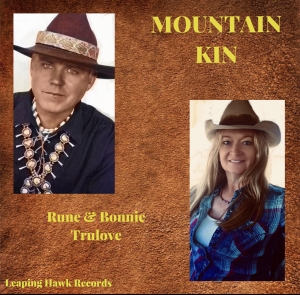 Rune & Bonnie of Mountain Kin are originally from the Ozark Mountains; and have been in the music business as musicians, singers, actors, and promoters. Rune grew up "jamming" on the mountain with some of the best bluegrass and rhythm and blues pickers in the world. Ready to spread his talents, he carried his style of music with him from Coast to Coast across the United States of America and Europe; and then back to the Ozark Hills. Bonnie has family roots in Texas and Arkansas. They toured with a Family Band known as The 6 Lbs of Music, The Pound Family, and later, The Pound Sisters. Bonnie had a song on the charts in Ukraine. The Pound Sisters single release of "Are You Lying, When You're Lying With Me" was voted the most requested Waltz. The CD Mountain Kin contains all originals, and one cover song, by Rune's Aunt Shannon, "The First Time."
Runes Father worked with Black Oak Arkansas and was a Manager for several other Bands. This CD is a collection of songs written by his Father, and Bonnie and her sister Linda. Rune's Father gave the songs to Rune before he passed, and asked him to record them. The other songs they chose that were written by Linda were recorded in a hope to do something for her, after Linda was in a bad vehicle accident that almost ended her career.

The collections of these songs and sounds offer a variety of Country, Bluegrass, and Folk music that makes this album pleasant to listen to from the beginning of the journey to the end.
1. Colorado Sunrise, (3:06) Modern Country Bluegrass Sound, an original written by Linda Pound Hoehne
2. Are You Lying (When You're Lying With Me) (2:53)written by Linda Pound Hoehne, and previously released in the 80's by Linda and the Pound Sisters on The Texas Sole Label. Linda did very well with this release with airplay and was voted the most requested waltz across the plains of Texas and Oklahoma.
3. Precious Angel (3:52) Country Rock, A love story. published by JayRoone Publishing, (John Trulove - Rune's father)
4. Cowboy From The Rio Grande (3:46) Western swing, written by Bonnie Pound Trulove and Linda Pound Hoehne on a School Bus on the way home from school, crossing The Red River. This song originally charted in Ukraine in the late 80's and 90's.
5. Janie (2:46)written by Bonnie Pound Trulove and Linda Pound Hoehne, Fiddling Country Bluegrass style. This song was Written about their Mother "Janie" and their Fathers Love for each other and struggling to raise 10 kids.
6. Ode To Betty Jo (3:49) Country Folk style. Written by John Trulove - Rune Trulove. A true story of sad lost love. When Rune's father was a young boy. He had a girlfriend he met on the Buffalo river. This is that story, told in Ozark tradition and styling of true Mountain Music.
7. Road To Ohio (4:02) Rock. Was written about a story in a newspaper and published by JayRoone Publishing.
8. Wishes (4:47) written by Linda Pound Hoehne, This is a broken love story caused by two hearts refusing to bend. This song was aired by George Noory on Coast to Coast AM Radio, featuring Rune & Bonnie; as new promising artists in June of 2020.
9. The News (4:26) Country, Bluegrass. Written by John Trulove - Rune Trulove. Even though this song was written 30 years ago, this song reflects our world today. No matter how bad things get, there can be a better tomorrow.
10. The First Time (2:43) A beautiful Ballad featuring (Aunt) Shannon Trulove. Although this song has been recorded many times; when you hear this simple arrangement with Rune and Tim Crouch finger picking style guitars, you will believe this is truly "The First Time" as it should be. Shannon's pure, sweet voice compliments this song.
11. The Kingdom (4:58) Mountain Gospel, written by John Trulove - Rune Trulove. (Mountain Prayer) This song is about the return of Jesus Christ.
12. The Grass Grew So Tall (On The Mountain) (2:45) Written by Linda Pound Hoehne. Country Bluegrass. A true story of fond memories of a musical family that grew up traveling across the country and found peace in the mountains.