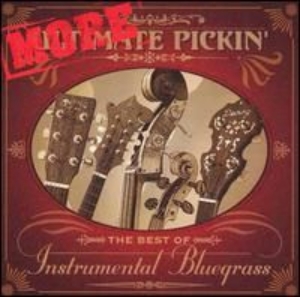 For a solid hour's worth of instrumental bluegrass, Pinecastle Records' second volume in their "Ultimate Pickin" series is sure to please. Their first 20-track compilation from previously released albums was put out in 2005. Now, "More Ultimate Pickin'" samples additional cuts from instrumental projects that hit the streets between 1995-2001, along with vocal-less cuts from three other releases associated with the label (from Kristin Scott Benson, Phil Leadbetter, and Bobby Osborne/Jesse McReynolds). There's a nice variety of slow and fast pieces, all with the standard bluegrass instrumentation of fiddle, banjo, mandolin, guitar, resophonic guitar, and bass. Don't worry about there being anything out of the ordinary...just relax and enjoy the crisp tone, quick-paced romps, Celtic flavorings, and spiritually-tinged offerings. In total, twenty-six different musicians contribute their proficient licks, but those who appear most prominently are Aubrey Haynie (fiddle), Scott Vestal (banjo), Jeff Autry (guitar), Wayne Benson (mandolin), Barry Bales (bass), Clay Jones (guitar), Rob Ickes (resophonic guitar), Rickie Simpkins (fiddle), and Adam Steffey (mandolin).
Between 1995-2001, there were seven annual albums released of instrumental bluegrass. Interestingly, six of the 20 cuts on "More Ultimate Pickin'" were drawn from the original "Bluegrass `95" release that was originally recorded and intended to be a solo project for guitarist Clay Jones. When Jones went to work in a non-music field, the project was almost shelved until banjo-player Scott Vestal convinced the label executives to go ahead and put it out for the original collaborators to sell at their shows. That CD, and the other six in the entire series, are gifts of gorgeous instrumental moods. "Ultimate Pickin" and now "More Ultimate Pickin'" are both recommended as the albums of choice to sample 40 total tracks from Pinecastle's instrumental archival library. – Joe Ross
Advertisement