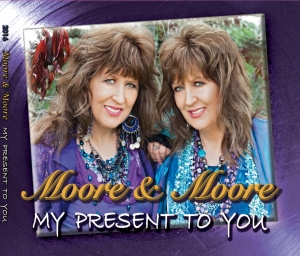 Moore & Moore's New Single Debuts at Number 4!
Moore & Moore's latest single with Billy Yates, "Sand In Our Shoes" debuted at #4 on the UK HotDisc chart and is currently #2 (June 2017) and pushing full steam ahead to #1!

To view the video, which was produced and directed by Randal Reed (Desert West Productions), click here: http://www.cmt.com/artists/moore-moore/videos/427666/

“Being Missouri girls, ‘Show Me’ has always been a part of our vocabulary,” said the duo. “We have been fortunate and blessed to be able to travel and perform in different countries and meet so many interesting people. Not only do we want to continue to experience unique cultures, we also want to meet true country music lovers. For us, ‘Show Me Your Country’ says it all!”

The video features the twin sister duo performing with their band in an open country field, along with scenes of the two hitting the road in a classic ’57 Chevy. Many of the scenes from the music video were shot during the duo’s travels in Europe.

The twin sister duo is made up of Debbie and Carrie Moore from Belton, Mo. Their current album, Show Me Your Country, is now available on iTunes and other major digital retailers. The latest single from the album, “Mississippi Missing You,” is currently #8 and climbing the European HotDisc Chart.

Moore & Moore released their first single, “Out With The Old,” in the ‘90s. The song was #1 on the Indie Bullet chart for seven weeks, making it the longest running No. 1 debut single in independent chart history. The twin sisters have toured all over the country and all around the world with well-known Country acts, including The Oak Ridge Boys and The Statler Brothers. Throughout their career they have won many awards, including “Country Duo of the Year,” and “International Entertainer of the Year.” The Moore sisters continue to tour both in the U.S. and internationally.

For more information on Moore & Moore and to view upcoming shows and appearances, please visit http://www.mooreandmooreonline.com/.

Moore & Moore Announce New Single Release and Upcoming Shows in Ireland
The Moore twins returning to the UK with a brand new single after success of "Country Girls Never Get Old" with Ireland's Queen of Country, Philomena Begley

Nashville, TN (November 4, 2013) – Award-winning country duo, singer/songwriters, Moore & Moore (Carrie & Debbie) will release their new single, “Mississippi Missing You” on November 4. The song is the latest single from their sixth studio album, “Show Me Your Country” on DOV Records.

“Mississippi Missing You” is written by #1 Songwriter, Debbie Moore, and is already getting great reviews as “poignant, very melodic and beautifully written”. The song centers around a friend/lover left behind in the shared hometown of Tupelo, Mississippi while the other pursues the dream of opening up a winery in France - probably not the usual country song, but the Moore twins are anything but “the usual”.

The unique duo will share the stage in Ireland with American artists, Buddy Jewell and Billy Yates for shows in Dublin, Wexford and Athboy in November, along with the Creme de la creme of Irish Country. For further details, contact LCM Promos: Tel. +353(0)87-290-9960 or E-mail: lcmpromos@yahoo.com

This event is FREE! Everyone is responsible for their own food and drinks. The Nashville Palace serves great appetizers, sandwiches, platters, salads and desserts. Specialties include prime rib and Southern-style catfish with ample portions of salad or soup and baked potato or fries on the side. Beverages include sodas, coffee, juice and full bar service.

NASHVILLE, TN (April 2012)- Country duo Moore & Moore rocked the UK with the pre-release of their new CD, Show Me Your Country. The sassy siblings introduced the album with performance stops in Scotland and England and radio and television interviews with the BBC. Hosting duties were also on the agenda as Debbie & Carrie filmed segments of their new television show in the United Kingdom, also titled Show Me Your Country, now in production, along with an accompanying music video.
# # #

They have toured extensively with the Statler Brothers and have appeared on the Grand Ole Opry. They have performed in Asia, Australia, Canada and Europe and received the International Duo and International Entertainer of the Year Awards. Debbie Moore co-wrote the #1 Billboard hit, "Wish You Were Here" with Bill Anderson and Skip Ewing recorded by Mark Wills on Mercury Records.

Moore & Moore’s album, “Million Roses”, with special guests, Bill Anderson, Shawn Camp, the Jordanaires and Jerry Reed, received rave reviews and an Airplay Gold Record “for Radio Report Points and Overall Industry Acceptance”. Moore & Moore’s previous album, “Meant To Be”, with special guests, Jan Howard & Jeannie Seely, George “Goober” Lindsey, Pirates Of The Mississippi and Johnny Rodriguez, was nominated for Country Album Of The Year by the Independent Music Awards. Their single/video “Find Me A Man Like Goober”, received enthusiastic reviews, including Music Row Magazine’s Robert Oermann claiming “Their twin-like vocal harmonies are absolutely perfect, and the bopping song is as cute as the dickens”. The accompanying video, featuring George “Goober” Lindsey and cameos of 17 legendary country artists, has been added to country video outlets worldwide.