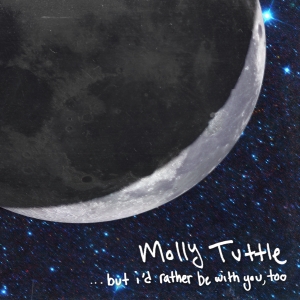 Award-winning singer-songwriter-guitarist Molly Tuttle has announced today’s release of her all new digital only three-song covers EP. …but i’d rather be with you, too is available now via Compass Records at all DSPs and streaming services.

Produced once again by Tony Berg (Phoebe Bridgers, Andrew Bird), …but i’d rather be with you, too is an addendum to Tuttle’s acclaimed 2020 covers LP, …but i’d rather be with you. The new EP showcases a remarkable trio of creative covers performed with some of Tuttle’s friends and favorite fellow artists, including renditions of Sheryl Crow’s “Strong Enough” performed with Madison Cunningham, Phantogram’s “You Don’t Get Me High Anymore” performed with Iron & Wine, and the Tom Petty/Stevie Nicks classic “Stop Draggin’ My Heart Around” performed with Nathaniel Rateliff, the latter of which had its official world premiere yesterday on SiriusXM’s Tom Petty Channel.

“Nathaniel has been someone whose music helped get me through the struggles of this past year,” Tuttle says, “and it was such an honor to sing with him on this song that I love. I have always wanted to work up this classic Stevie Nicks/Tom Petty duet with someone and it was a thrill to do it with one of my favorite singers. We recorded our parts remotely but I hope we get to do it in person someday!”

Released last August to worldwide critical applause, …but i’d rather be with you collects 10 striking cover songs recorded during quarantine and produced with the help of Tony Berg. Among its many riches, the album includes renditions of The National’s epic “Fake Empire,” Rancid’s “Olympia, WA,” The Rolling Stones’ “She’s A Rainbow,” FKA twigs’ “Mirrored Heart,” and the Grateful Dead favorite, “Standing On The Moon.”
4
What's This
Advertisement