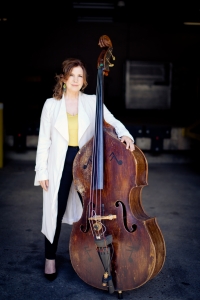 On ROYAL TRAVELLER, award-winning bassist Missy Raines comes into her own as a vocalist and songwriter on a collection of songs that reflect the breadth of her musical vision. The album’s title track is a nod to Missy’s many years of dedication to her art and the challenges endemic in the pursuit of a musician’s life. Co-written with Ed Snodderly, the idea for the song came to Raines as she was driving by herself through a snowstorm. She reached for a vintage makeup case, saw the words ROYAL TRAVELLER engraved on the handle and felt the power, and irony, of those words speaking directly to her. Over the years and miles, Raines has become a true icon in bluegrass music. But, on her solo projects, she has explored other musical avenues, delving into indie folk, jam grass and jazz-leaning material. ROYAL TRAVELLER corrals these disparate influences into a project that illustrates the full range of Raines’ musicality.
The album’s first single “Swept Away” is a neo-bluegrass affair written by Laurie Lewis and featuring the First Ladies of Bluegrass: Missy, Molly Tuttle, Sierra Hull, Becky Buller and the album’s producer Alison Brown, all of whom, like Missy, were the first women in the history of the International Bluegrass Music Association to win Instrumentalist of the Year awards on their respective instruments. Other stand out tracks include a cover of the Bonnie Raitt song “Fearless Love” featuring Tim O’Brien on lead and harmony vocals and backed by the legendary Dan Dugmore on lap steel, and “Goodbye Virginia” penned by Robbie Fulks, with whom Missy occasionally tours, featuring lead and harmony vocals from The Steel Wheel’s Trent Wagler. The iconic bassist’s instrumental chops are highlighted on the album’s sole instrumental track, a re-working of the classic Flatt and Scruggs era bass and banjo duet “Darlin’ Pal(s) of Mine” featuring fellow upright bass legends Todd Phillips and Mike Bub. Other guests on the album include Claire Lynch, Amy Ray (Indigo Girls), 10 String Symphony, Stuart Duncan, Ethan Ballinger, Bryan McDowell and many more.