Things About Comin' My Way (Tribute to theThe Mississip 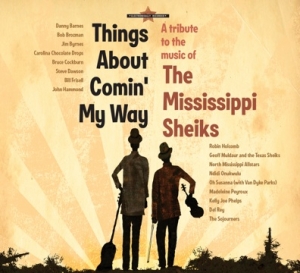 This is not music for the faint of heart.

The songs on this CD come down to us from a world long gone, a world gone wrong where broken hearted murderers rubbed shoulders with wife stealing preachers. Listen carefully and you can almost hear the wind moaning through empty graveyards and churches as one man calculates the odds of playing bed spring poker while another moans that his pencil don’t write no more.

Whether bent in prayer or bloody eyed in the throes of howling lust, the Mississippi Sheiks songs took a suffering generation on a ride through a universe populated with characters that walked the razor’s edge between sin and redemption, grace and depravity.

Between 1930 and 1935, Sam, Lonnie and Armenter Chatman, the three sons of slaves who along with Walter Vinson made up the core of the Mississippi Sheiks created some of the most memorable blues rants and square dance hollers ever conjured up.

Their sound was indefinable - part country and part apocalyptic blues filtered through yearning fiddle and gut bucket guitar – and by the time their race was run, The Mississippi Sheiks had redefined what a string band could do. Over the course of nearly a hundred singles - seventeen of which are gloriously interpreted here – their scratchy howling at the moon tales of life at the crossroads captured the hearts of a temporarily colour blind America as they toured the country, selling millions of records along the way.

Though they only were together for five years, by the time they called it quits the Mississippi Sheiks had left a body of work behind that still resonates in today’s world. This is music that sounds as ancient as a Dead Sea Scroll and like it could have been written yesterday.

It’s a body of music that Vancouver songwriter, musician and producer Steve Dawson has been obsessed with for many years, and this project represents the fruition of a long time dream.

There is no shortage of tribute albums out there and given a certain modicum of talent, it’s not rocket science to make a record that sounds a lot like the music of the artist being celebrated, but for this project Dawson envisioned something different.

“I was never interested in recreating the music. It’s more of a conversation and exchange with the originals that I had in mind. So, when I started this project, I was looking for good interpreters who could capture the essence of the songs in a kind of portrait. I wanted to work with people who could celebrate the music and the songs”

An initial recording session in Vancouver with Jim Byrnes, Oh Susanna got things off to a promising start and resulted in two killer tracks. Native Mississippian Van Dyke Parks, the elusive pop icon best known for his work on Brian Wilson’s Smile project later contributed elaborate string arrangements to Oh Susanna’s take on ‘Bootlegger’s Blues’ - giving a new perspective to an old classic. Dawson and guitar virtuoso Bob Brozman hooked up at the Canmore Festival in Banff to record a stirring rendition of ‘Somebody’s Gotta Help You’ to keep the ball rolling. The North Mississippi All Stars delivered a version of “It’s backfiring now”, Geoff Muldaur contributed his interpretation of “The World is Going Wrong” and the project started to seem real. A subsequent foray to Ottawa to record with blues legend, John Hammond and the Afro American string band, The Carolina Chocolate Drops really got the momentum going as both artists nailed their songs in an exhilarating all day session. Bill Frisell recorded an instrumental take of ‘That’s It’ - his contribution to the album - on the same day in Seattle and it was starting to look like there was no end to what was possible on this project.

“A lot of tribute albums have nothing that holds them together. There’s no flow and they all end up being disparate performances. For this album, we recorded in three big sessions, and at one session we had a house band to back up several artists, so there’s some consistency to the sound and feel of the recordings.”

So, to achieve this a big session in Seattle was arranged and a group consisting of jazz legend Wayne Horvitz (John Zorn, Zony Mash) playing piano, Keith Lowe (Bill Frisell/Fiona Apple) on bass and Matt Chamberlain (David Bowie, Peter Gabriel) on drums was put together to create a consistent sound.

“We were trying to create a vibe that hearkened back to the Stax Volt days where singers and musicians would come in not knowing what they were going to play that day, but would come together and create something spontaneous and in the moment.”

The results speak for themselves. Over the course of two days in November, Dawson captured performances from Kelly Joe Phelps, Bruce Cockburn, Del Rey, Robin Holcomb, Danny Barnes, The Sojourners, and Ndidi Onukwulu as well as recording a contribution of his own. Madeleine Peyroux was busy finishing her own album and couldn’t make the Seattle session, so she delivered a vocal track that the house band laid down the instrumentals for. Each artist brought his or her own unique energy and style to the project, and by the time an exhausted Dawson headed back to Vancouver, he knew he had something very special to share.

There aren’t many CDs like this one being recorded today. Life is short, and like the song says you may only be sitting on top of the world for a moment, so close your eyes, sit back and allow the songs to take you away to a world that has long since passed. Whether you’re new to the music of the Mississippi Sheiks or have been dreaming of a tribute like this for years, music doesn’t get any better than this. Listen and you won’t be disappointed.