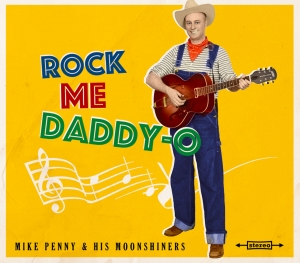 Mike Penny & his Moonshiners - Rock Me Daddy-O
Mike Penny & his Moonshiners are back with their third album by Rhythm Bomb Records and reconnect with “Texas Boogie”. Musically richer and more sophisticated, they continue to follow the path that their idols have established at the end of the forties up to the beginning of the 1950s: with “Rock Me Daddy-O”, the Country & Western elements move in the background and are replaced by Jumping Jive, Boogie and Rhythm’n Blues (greetings from Bill Haley). This makes “Rock Me Daddy-O” the most danceable album from the five Hillbillies and should not be missing at any party.
Worth mentioning in addition to the danceable Jive numbers such as “Daddy-O-Rock”, “Rompin’ Stompin’”, “Diggin’ The Boogie”, “Jump Jack Jump” or “How long must I wait”, a cool stroll version of the Indie-Song “Creep” (by Radiohead) as well as a cover of “18 Miles to Memphis”, which sounds almost as if it was the actual original version of the Stray Cats title.
“Rock Me Daddy-O” sounds both vintage and modern at the same time. This is quite intended because with the recording of the new album, Mike has also fulfilled his youth dream and built up his own studio with a mix of old analog and new digital technology. That certainly explains the long production time of one year.

Mike Penny & his Moonshiners
Mike Penny & his Moonshiners are an authentic 50s Outfit with a rootsy and original sound – combined with Mike Pennys geat crooners voice and a lot of rockin’ and swinging Hillbilly tunes. Definitely a great live band, whether at big festivals or small clubs. Always enchanting & danceable.
Mike has been playing at festivals all over Europe: The Rockabilly Rave, Hepcats Holidays and Rhythm Riot in UK, Summer Jamboree festival in Italy, Rockin’ around Turnhout (Belgium), and several venues around Germany.
First album “Don’t start breathin’ down my neck!” was released in 2010 on Rhythm Bomb Records and contains 15 mostly Western Swing tracks – from Hank Penny’s “Peroxide Blonde” over Merle Travis “So round so firm so fully packed” to a Western Swing Cover of “Mr. Sandman”.
The second Album “Texas Boogie” is even more rootsy sounding but also much wilder than the first one. Recorded at the famous Lightning Recorders Studio in Berlin. All recordings were made analogue and live to tape. Mike also added the great honky tonkin’ boogie piano player Thomas ‘Piano’ Schultze and the brilliant travis guitar picker Axel Praefke (Cherry Casino, Round Up Boys, …) to the band. A great combination of wild Hillbilly, early Rock And Roll and old style Western Swing tracks.
8
What's This
Advertisement