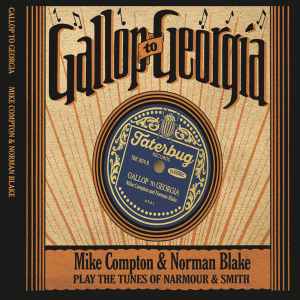 With American string band music enjoying another historic run of growth and evolution in the hands of musicians and bands of all ages, the masters and sages of its traditional forms are in demand and in the spotlight. That makes Gallop To Georgia – a rediscovery and tribute project by mandolinist Mike Compton with guitarist Norman Blake - a signifying and relevant album,even if the source material from old-time duo Narmour & Smith is almost 100 years old.

Fiddler William T. Narmour (1889–1961) and guitarist Shellie W. Smith (1895–1968) were popular musicians at dances, fairs and gatherings in and around their home of Carrol County, MS in the early 20th century. Most bluegrass and old-time players to this day know a version of their most famous song, inspired by their home ground, “Carrol County Blues.” But the two
were prolific, recording 48 sides for iconic blues labels Okeh and Bluebird between 1928 and 1934. They also befriended a young Mississippi John Hurt, who played rare inter-racial sets with Narmour when Smith had other obligations.

Compton heard some of Narmour & Smith’s recordings growing up in nearby Meridian, MS,hometown of Jimmie Rodgers and a fertile place to learn about classic country music and the blues. He learned to play surrounded by family and friends, some of whom are thanked in the liner notes of the new album. But Compton would become best known in string band circles as a mandolinist who deeply absorbed the seminal sound and repertoire of Bill Monroe. Equally fascinated by the pre-bluegrass Monroe Brothers sound as the post 1940s Bluegrass Boys, Compton eventually became a protégé of the icon and an expert in Monroe’s multi-faceted musicianship. Years with the Nashville Bluegrass Band and the John Hartford String Band, as
well as a prominent musical role in the O Brother, Where Art Thou? soundtrack and its Down From the Mountain tours, secured Compton’s place as a revered musician and educator.

In recent years, Compton has pared back from a bluegrass ensemble outlook to much more frequently playing as a duo (with instrumentalist and singer Joe Newberry) and as a solo artist.

Standing alone in his signature overalls, he stirs up succulent blues and old-time tunes on his mando and sings in a strong, lonesome voice. So this intimate recording with Norman Blake,one of the most influential guitar players of the last 50 years, has a sense of purpose, besides being delightfully easy to listen to. “I wanted to pay homage to the time when I was first
hanging around string band players as a young person – mostly older men around my grandfather’s age. They all played a few tunes from Narmour & Smith,” Compton says. “It’s sort of re-living fond memories of my own past, and I just felt like I needed to do it.”

It began with homework, studying the source material more closely than he ever had before, and it proved tricky. “I wanted to stick close to what Narmour was playing, but the difficulty of playing fiddle tunes on the mandolin obviously is you have frets, which takes away a lot of the micro-tones. Some of the tunes have notes in them that are pitched a little off. Trying to
incorporate his bowing – the way the accents lay out when you push or pull the bow – with a pick, that turned out to be more of a challenge than I thought it was gonna be.”

But when Norman Blake entered the picture, Compton says, the path became clearer and the
songs took on the life he’d hoped for. Blake’s mastery as an acoustic musician has been wellestablished
for decades. He was a sideman for Johnny Cash, including on the televised Johnny
Cash show. Blake supported Kris Kristofferson, Joan Baez and Bob Dylan. His collaborations with
John Hartford became highly influential, and he played on the iconic Will The Circle Be
Unbroken album in 1972. His own career as a guitarist and singer, much of it with his celloplaying
wife Nancy, offered a new road map for the flatpick guitar, an elegantly efficient and
unadorned flow that’s beguiled and influenced guitarists ever since.
Compton and Blake had known each other for years and worked on some of the same projects
– notably O Brother and the tours that followed – but never closely collaborated on an album.

Compton invited Blake to join this effort and was glad to get a yes, given that Blake is otherwise retired from recording. Blake demurred on playing lead guitar on Galloping To Georgia, opting instead to play his deft rhythmic support to Compton’s mandolin. He took just a few liberties interpreting and enhancing the chords as he learned them from the original recordings. And he hosted the rehearsals at his rustic North Georgia home.

Recorded at Cook Sound Studio in Fort Payne, AL, the sessions produced 16 songs that will
introduce listeners to the Narmour & Smith repertoire far beyond “Carrol County Blues.” The
tunes have an engaging cadence with asymmetries and little quirks that keep the music lively
and fresh. The two masters, without thinking about it, take great care with the music’s
dynamics and nuances, leaving lots of space for the ear to hear elements of timing and melody
that set this body of work apart. “The point of it is simple,” Compton writes in his liner notes. “That being to retell some of the old stories told almost 100 years ago, to show that things were done as well and as passionately back then as they are now, that the old songs are still valid and alive in us yet and have much to say.”

The same could be said about Mike Compton and his vision for this album and many more to come.
11
What's This
Advertisement