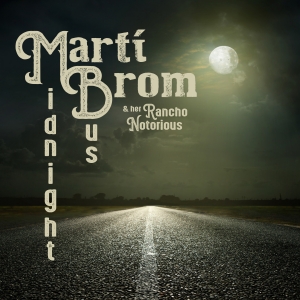 Deke Dickerson says:
Great news for many fans of the Texas songbird and Ameripolitan Award-winner MARTI BROM—this is her newest album, and it’s a doozy!

Marti has made a reputation for herself all over the globe with her singing talents. She has won over hearts in Australia, knocked them dead all over Europe, and stunned American crowds with equal fervor. Marti is the real deal, and this new album delivers more of the greatness you’ve come to expect.

Recorded in Sweden with excellent Swedish musicians and a few guests like Rosie Flores, Chris Ruest and Billy Bremner, “Midnight Bus” continues the great mixture of rockabilly, honky-tonk and ‘torch country’ that Marti has nurtured and refined through the years.

From the album’s rockin’ opener “Come Destroy Me” (a Marti original) to “If If Was A Fifth” to “Mama’s Little Babies Was A Rockin” to “Last Ten Years With You” (the latter written by Dr. “Crazy” Joe Tritschler) and her cover of Little Richard’s “Slippin’ and Slidin’,” Marti’s rockabilly fans will not be disappointed!

She dips into hard country with numbers like “Lasso Mr. Moon,” “Push Me Till I’m Gone,” “Lies Of A Promise,” and the classic number “Little Ole Winedrinker Me.”

Marti’s emotive, heartbreaking voice will knock you down on numbers like “Ambush,” “Stiletto In Black,” “Drivin’ Me Crazy,” and the title track, John D. Loudermilk’s “Midnight Bus.” (And if you’re lucky enough to own the vinyl release of the album, you can hear Marti shred some bluegrass on “Damn Those Little Demons,” a vinyl-only bonus track)

Marti Brom never lets you down. This album is a great one to add to your collection. Catch her on tour when she comes to your town, and let her know how great she really is. She’s really a treasure, and we’re lucky to have her.