Maureen Haworth "Christmas - All is Calm" 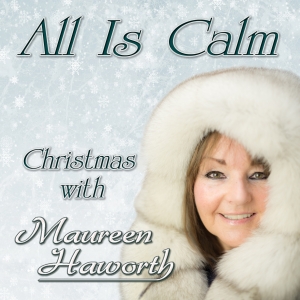 2015/2017 Award winning and Covenant Award nominee, Maureen is one of 4 siblings. She grew up attending the First Baptist Church, singing in the choir and playing the piano and guitar. There she met and later married her childhood sweetheart, Rick, and is blessed to be part of their very musical family.

Now living in Grand Forks in Southern B.C , Canada, Maureen has continued singing and over the past few years has begun to write and record Gospel music. She and her husband released their first gospel album together in 2013, We're Gonna Raise the Roof, which was very well received by worldwide radio and garnered spots on top international charts.

With Rick stepping back into a more supportive role, Maureen has gone on to record her debut solo album in late 2014, It's Time, an uplifting, thought provoking and inspirational collection of Country/ Southern Gospel songs.

As an accomplished songwriter, she penned 12 songs on both of these albums while her husband wrote 9 of the 21 original songs you’ll hear. (Maureen's also picked up a few notable songwriting awards along the way).

In November 2016, Maureen released a Christmas CD of traditional songs done in a very mellow and easy listening style.With all the excitement of the Christmas season, her goal was to put out a collection of songs to relax and unwind with. It even comes with a tea bag and ribbon so you can take a breather, settle back and enjoy the calm and soothing songs of Christmas. This beautiful CD was nominated for 2 Canadian Gospel Music Covenant Awards.

Maureen is performing in churches, concerts and festivals, sharing her music ministry and praising Jesus.
She feels extremely blessed to be able to mix her love of God with her love of singing and song writing, hoping to touch and move people with her songs