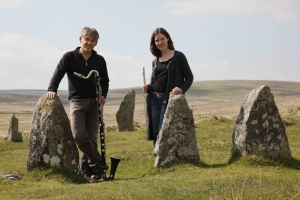 
Susie Hodder-Williams was born in Kent and studied English at the University of York and the flute at the Royal Northern College of Music. Her love of music ranges from the more traditional classical repertoire to contemporary music and techniques; the use of breath, so unique to the flute, Japanese contemporary music, and, enthused by the landscape of Dartmoor, how music connects with the land and how the flute has been used in folklore.

She studied energy medicine at the Lakeland College and is inspired by how music is used and can be developed in the world of healing. She is currently recording a series of CDs exploring the two worlds: The Tao of Homeopathy, a reading read by the author, Ian Watson, underpinned by soundscapes created by Susie Hodder-Williams, will be launched in 2011 and a CD inspired by the Alaskan Essence Research Project will be released in 2012.

Concert tours have brought her to the Far East, Europe, around the UK and more recently to the US. She has performed with the London Mozart Players, the Royal Philharmonic Orchestra and Concert Orchestra, Bournemouth Symphony Orchestra, New London Sinfonia, English National Ballet and the Irish Chamber Orchestra.

She has been broadcast on BBC Radio 3, both as a chamber and orchestral musician, (In Tune & Late Junction December 2nd 2010) played at the BBC Proms and recorded several contemporary and chamber CDs for FMR records. Her new recording, The Mariner's Way, has been launched this September 2010, at the Greenaway Barn Gallery as part of the Devon Open Studios.

The international composer, Steve Goss has just written her a new piece for solo flute, entitled The Sea of the Edge, which will be first performed at Guildford International Music Festival on March 21st 2011. She is releasing the world première recording of this work in the Spring 2011 on the FMR label.

Chris graduated from the Guildhall School Of Music & Drama in 1986 having studied with Stephen Trier. As a performer he's been involved with some of Britain's leading contemporary composers and ensembles including The Mike Westbrook Orchestra, BCMG, Steve Martland Band, London Saxophonic, Michael Nyman Band and The Delta Saxophone Quartet.

His commercial work has seen International tours with the London Concert Orchestra (Anton & Erin from Strictly Come Dancing), Shirley Bassey Orchestra in Russia, Lebanon, Turkey, Cairo and the UK plus tours of Asia, Japan and Europe with the Michael Nyman Band, Grahamophones, and for a variety of theatre groups.

Since 2009, Chris has been exploring and developing a new area of improvisations and compositions with Susie Hodder-Williams, inspired by the natural history of Dartmoor. The Mariner's Way CD is the first result of this fruitful partnership which was launched at the Greenaway Barn Gallery as part of the Devon Open Studios. In 2010, he set up a performance series, in Devon, called Music on the Edge which has found its first home in the engaging Long Room, Drewsteignton.
0
What's This
Advertisement