Bob Margolin - Down In The Alley 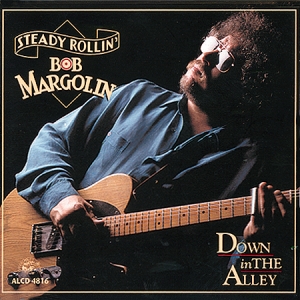 "Enough down and out," says master bluesman Steady Rollin' Bob Margolin. "It's time for up and in." Dispelling the myth that the blues is sad or depressing music, Margolin's blues just as easily induce a smile. A supremely talented guitarist, singer and songwriter, Bob was schooled by none other than the great Muddy Waters. As a bandleader, soloist, songwriter, vocalist and in-demand session player, Margolin easily combines the rock and roll of Chuck Berry, the deep Chicago blues of Waters, and original songwriting reminiscent of great writers like Willie Dixon and Mose Allison. With his explosive guitar attack, he is equally capable of playing harrowing slide or jazzy swing. "With a superbly primitive tone and a rough-and-tumble guitar style, Margolin makes his blues as potent and exciting as the roots he draws on," exclaimed Guitar Player. But fans and critics aren't the only ones bestowing honors upon Bob. Two recent recordings featuring Margolin, Junior Wells' Come On In This House and You're Gonna Miss Me When I'm Gone by The Muddy Waters Tribute Band, both received 1996 Grammy nominations.

Bob's success is really no mystery, considering he's been leading his own band for almost 20 years, gigging virtually non-stop. "I've played every kind of gig from glorious to ridiculous," he says. He began his pursuit of a solo career in 1980, deciding to step out on his own after seven years with Muddy Waters. He released two albums on Tom Principato's Powerhouse Label, Chicago Blues and The Old School. Both albums drew favorable responses, but they didn't fully show Bob's immense talents. But in 1992 everything changed when Bob signed with Alligator Records. His label debut, Down In The Alley, was both an artistic and a commercial breakthrough. Features and reviews ran in national and regional press. Living Blues said, "Self assured vocals and clever songwriting ... he keeps the 'old school' alive with intelligence, energy, and authenticity." The album fully displayed Bob's own talent for making 1950s-style blues come alive for 1990s audiences.

His next release, My Blues And My Guitar, found Bob pushing himself further. Using Muddy's Delta slide sound as a jumping off point, Margolin unleashed furious guitar excursions ranging from Charlie Christian-style solos to Chuck Berry rockers, further defining his contemporary yet deeply rooted style. "Raw power, soul, charm and a tight focus," said the Washington Post. "A sound as thick and humid as Mississippi air in August," raved the Boston Phoenix. Bob was now more in-demand than ever. At the 1994 Chicago Blues Festival, he appeared on his own as well as sitting in with a wide variety of artists including Snooky Pryor and Jimmy Rogers. A few fans dubbed it the Bob Margolin Blues Festival, but for Bob it was a true career highlight. "It was like they threw a party and I could jam with Chicago's greatest musicians."

Bob continues to steady roll, touring virtually non-stop throughout the U.S. and Europe. In the past two years alone he's gigged with his own band, with James Cotton, Pinetop Perkins, and as part of the Muddy Waters Tribute Band. He spent the summer of 1994 on the road with B.B. King, Dr. John and Little Feat. And he's guested on numerous albums, including labelmate Ann Rabson's Music Makin' Mama, labelmate Billy Boy Arnold's Eldorado Cadillac, John Brim's Ice Cream Man and many others.

While Bob's stature in the blues world keeps growing with each new release, he's quick to remember his roots. As a child in Brookline, Massachusetts, he fell in love with the music of Chuck Berry, learning guitar by playing along with the records. Before long, Margolin discovered Berry's labelmate, Muddy Waters. "It was like a priest getting the calling," says Margolin. "When I first heard Muddy, it changed my life and gave it direction."

By the early 1970s, Bob was gigging with blues guitarist Luther "Georgia Boy" "Snake" Johnson, a Muddy Waters alumnus who introduced Bob to the man himself. Impressed by Bob's blues guitar playing and dedication to his blues, Muddy called on Bob in 1973, when he found himself in need of a new guitarist for his band. Bob stayed in the band for the next seven years, appearing on eight official Waters albums (as well as many European bootlegs) and playing hundreds of concerts with the blues legend. He learned many things directly from Waters, including Muddy's patented "delay-time" guitar technique (playing behind the beat), finger-picking, slide and strumming techniques.

Night after night Bob was schooled in the feeling and low down dirty tone that was essential to the Waters sound. And even though Muddy was not the most gentle teacher ("He said it would hurt like being in love," recalls Bob), Margolin persevered, and before too long he became Muddy's right hand man, acting as musical liaison to other players during jam sessions. That's why Muddy wanted Bob at his side during The Band's farewell concert, which was captured in the Martin Scorsese film, The Last Waltz. Bob can be heard and seen playing the guitar while Muddy belts out “Mannish Boy” to astonished fans and open mouthed rock stars, including Bob Dylan, Van Morrison, Ringo Starr, Eric Clapton, Neil Young, Joni Mitchell and many others.

Over the years, Bob has gigged, jammed with or opened for, in his words, "damn near every blues legend that was alive." This list includes Lightnin' Hopkins, Willie Dixon, John Lee Hooker, Big Walter Horton, Hound Dog Taylor, Albert King, R.L. Burnside, Etta James and many others. Solo or with Muddy, he's played with rockers The Allman Brothers, Stevie Ray Vaughan, Lonnie Mack, Johnny Winter, The Band, Bonnie Raitt, The Rolling Stones, and, in 1978, performed for President Jimmy Carter.