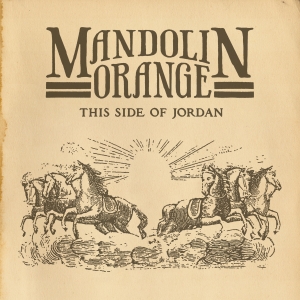 At it’s core, Mandolin Orange is a duo - Andrew Marlin and Emily Frantz - from Carrboro, NC. Their harmonies are ethereal, their chemistry vibrant, bringing to mind the atmosphere invoked by classic duos such as Emmylou Harris and Gram Parsons, or Gillian Welch and David Rawlings. Andrew and Emily provide the foundation of the group's timeless Americana sound, while enlisting a full band to flesh out their dynamics. This Side of Jordan is the group's 3rd full length album. The band has made quite a bit of noise on the folk/Americana circuit, while displaying a virtuosity and exuberance that crosses over to more indie-rock inclined audiences.

In 2011 Andrew Marlin had a near fatal accident. “It was scary,” Emily Frantz, the other half of the North Carolinian duo says, “But ultimately it brought us together during a time when we needed a nudge in that direction.”

This Side Of Jordan is the story of that healing process, with tales of love and loss, told honest and bare. This Side Of Jordan still maintains Mandolin Orange’s modest aesthetic with pure and calming sounds. It’s a fitting juxtaposition to Marlin’s undeniable lyricism. Religious faith and fable thread throughout the record with Biblical references used to “convey a different point,” Frantz says. “In the south especially, we hear the Bible construed in any and every way to justify people’s comforts and discomforts,” Marlin further explains, “it’s so frustrating to watch those stories be used to limit people’s happiness.” This sentiment inspired “Hey Adam,” where Marlin and Frantz urge in unison during the chorus, “Our Father loves you all ways.”

Marlin and Frantz have rambled through the dark and came out together on This Side Of Jordan more confident than ever. They’ve made simply structured songs with easy chords and humble harmonies. These are the hymns that Mandolin Orange was meant to offer.