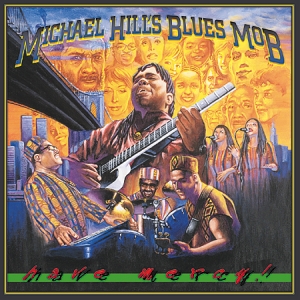 New York's Michael Hill's Blues Mob play deep blues for the body and soul, both as an astonishing live act--just ask any of the thousands of people mesmerized through a rainstorm at the 1996 Chicago Blues Festival--and as a rip-roaring and award-winning recording group, Michael Hill's Blues Mob stands out in the small circle of young, African-American blues artists bent on keeping the blues alive by taking the music into previously uncharted territory. "Hill is truly the bluesman piloting the music into the next century," proclaimed Blues Revue. Michael Hill's Blues Mob bring raw sweat, energy and intensity to every song they play. Hill's impassioned, sometimes humorous songs, his sweetly soulful singing voice and explosive guitar playing are perfectly complemented by the expert musicianship of the Blues Mob--Pete Cummings on bass, E.J. "The Professor" Sharpe on keyboards and Tony Lewis on drums. With their Alligator release, New York State Of Blues, Michael Hill's Blues Mob continue to blaze a modern blues trail filled with cutting edge tunes and foot-stomping rhythms. Through his original songs (Hill wrote or co-wrote nine of the album's 11 songs) and formidable musicianship, Hill and his band boldly raise the bar for their contemporaries meanwhile raising the roof wherever they play. "Incendiary," shouted Guitar Shop. "A wonderful melting pot of R&B, blues, fusion, reggae, and balls-out heavy rock." But it's not just about the fiery music. "For me," says Hill, "writing is as important as playing guitar. The blues is about telling stories. The guitar playing and musicianship are important as long as they're serving the song or story. The lyrics give the playing and singing something to do."

New York State Of Blues is a tour-de-force of tough, inner city scenes, lovers' temptations and blues celebrations co-existing in Hill's guitar drenched, polyrhythmic universe. From the searing opener “Long Hot Night” (co-written by Vernon Reid) to the prophetic and humorous “Young Folks Blues” to the reinventions of the Temptations' “Papa Was A Rolling Stone” and Stevie Wonder's “Livin' For The City” to the album's closer, the soulful and hopeful “Never Give Up On You,” Michael Hill's Blues Mob grab their listeners with their every-note-matters musicianship and draw them in with Hill's storytelling skills and his powerful vocals.

"Michael Hill is the hippest bluesman around," cheered the Philadelphia Daily News. "Radiating energy, warmth and social enlightenment, Hill emerged from the South Bronx to give blues a new meaning, direction and sound."

Unlike more traditional bluesmen, Hill doesn't come to his blues from the Mississippi Delta or the South Side of Chicago, but from his native New York City. Born in the South Bronx in 1952 and raised by a close-knit family with roots in North Carolina and Georgia, Hill's music--a mix of traditional blues with rock, reggae, funk and R&B--vividly reflects his upbringing. Always a music fan, Hill didn't start playing guitar until 1970, a year after he first heard Jimi Hendrix. "There was no mistaking what Hendrix brought to the table for me," Hill recalls. "He was the reason I started playing electric guitar." After seeing his hero five times-- including a stage door meeting outside the Fillmore East--Hill's fate was sealed. With Hendrix as a blasting off point, Hill next turned to bluesmen like Albert King, B.B. King, Albert Collins, and others to build his sound. His discovery of Bob Marley and Curtis Mayfield, as well as authors James Baldwin and Toni Morrison (among many others) inspired him to write songs that speak about socially relevant subjects as well as more traditional blues topics. "Marley focused me on songwriting," says Hill. "He was so articulate and clear when he spoke to things. The consistent high level of his songwriting definitely inspired me to speak to issues which don't often get addressed in popular music and to still be uplifting."

By the mid-1970s Hill was working as a sideman or session player while still holding down day jobs (including a stint as a New York City cab driver). Over the years, he played alongside Little Richard, Carla Thomas, Archie Bell and Harry Belafonte. He played with Dadahdoodahda, a New York band which also included Vernon Reid before Reid formed Living Colour. Hill recorded with B.B. King and, along with his friend and fellow Black Rock Coalition member Reid, contributed a song to Shanachie Records' Tribute To Curtis Mayfield. Hill can also be heard on the Rykodisc Black Rock Coalition compilation, A History Of Our Future.

Hill's biggest break came in 1994, the year Michael Hill's Blues Mob emerged on the national blues scene with their Alligator Records debut, Bloodlines. Hill and his Blues Mob laid the groundwork for the future of the blues.”Living Blues” handed Michael Hill's Blues Mob their Critic's Award for Best Debut Album of the Year. “Guitar Player” called Bloodlines "a cliche-smashing debut." Rolling Stone said that on the album "Hill's Blues Mob smokes with the combined sizzle of Robert Cray, Living Colour and Jimi Hendrix." "Not since Muddy Waters invented electricity," raved the Chicago Sun-Times, "has anyone charted as radical a course for the blues as Michael Hill."

The group's follow-up album, 1996's Have Mercy!, featured another collection of ground-breaking electric blues, at once mind-expanding, soul-satisfying, fun-loving and thoroughly entertaining. Once again fans and critics went wild. Featuring another 13 Hill originals, Have Mercy! took the blues storytelling tradition far beyond themes of simple romance. "Big beats, screaming leads and lyrics from the mean streets," said the Pittsburgh Post Gazette. Jazz Times said, "Hill sprays sweet-toned notes with dazzling bravado ... affecting, thoughtful soul." "Hill celebrates the blues form without being shackled to it," said the Washington Post. Even GQ got into the act, declaring, "Hill is a smart, genre-busting guitarist."

Since releasing their two Alligator albums, the band has been tearing up the road. From the Chicago Blues Festival to Australia to Brazil to Scandinavia and throughout Europe to clubs all over the United States (including a jaw-dropping set opening in Chicago for Luther Allison), Michael Hill's Blues Mob never ceases to amaze. "We play every show like it's our last," says Hill. Our goal is to turn the place out and make a great connection with every audience." While not shying away from more serious blues, Hill knows that "the music needs to be fun and bring joy to people. Our shows have always been a celebration. For us it's about groove, dynamics, telling stories and good musicianship. We get the people involved and make sure folks have a good time."

And that's just what Michael Hill's Blues Mob delivers with New York State Of Blues. "For me," says Hill, "the most important thing my music can do is be a healing force and uplift people." Guitar Player described Hill's cutting-edge, radio-friendly sound -- a-guitar-stoked mixture of timeless blues feeling, blistering musicianship and original songs full of passion and humor -- as "kick **** and world class." As the Chicago Reader suggests, "bring your dancing shoes and your thinking cap," because the Blues Mob's infectious music keeps your tail spinning while Hill's tale-spinning and super-charged guitar playing showcases ... the shape of blues to come in the 21st century.