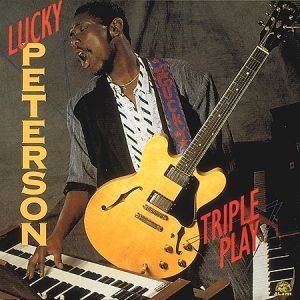 
Lucky Peterson played his first gig at age three. By the time he was five, he had already recorded his first single, produced by none other than the legendary Willie Dixon. Before Lucky turned six, his career had been propelled into the national spotlight with television appearances on The Ed Sullivan Show, The Tonight Show with Johnny Carson and even What’s My Line?

During a break in Bobby’s touring schedule, Lucky headed to Europe on a package tour billed as "Young Blues Giants." There he recorded his second career album this time for the French label Isabel Records. In 1988, Lucky left Bland’s touring band, relocated to Florida’s Tampa Bay area and began concentrating on a solo career. His reputation quickly led to regular session work for tiny Florida-based King Snake Records. His funky keyboards sparked Kenny Neal’s Big New From Baton Rouge!!, Rufus Thomas’ That Woman Is Poison! and Lazy Lester’s Harp And Soul, which were all released by the more visible Alligator Records label. In 1989, Alligator released Lucky’s third solo outing, Lucky Strikes! Lucky co-wrote three songs for the album and played all of the keyboard parts and all but one of the guitar solos.

Alligator’s promotion helped to bring Lucky’s music to the attention of radio stations and music critics nationwide. They liked what they heard. Billboard called Lucky "…a prodigy whose raw talent bodes well for his future as a leader."Keyboard said, "Peterson is a 26-year-old blues master." The album received airplay on nearly 200 radio stations nationwide, and Lucky toured the U.S. several times.