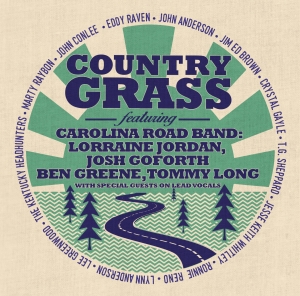 Country Grass is fueled by the first single, “Runnin’ Water,” which features Grammy-award winning band, The Kentucky Headhunters. The single has been met with high critical acclaim. The Boot says “while Jordan’s band and their distinct sound already turn heads, combining with the Kentucky Headhunters brings a rich new feel to the catchy tune.”

“Working on the Country Grass project was a great experience for me, and I was so thankful to have been given the opportunity to record with so many great country legends,” said a humble Lorraine Jordan. “Most of these artists helped shape my traditional roots early in my career. Combining bluegrass with the country classic artists on vocals invites a whole new fan base into my world of music. I am proud to be a part of a new transition, which we call Country Grass.”

Listeners will be taken on an emotional journey, with songs that hit the highest of highs and the lowest of lows. Lorraine Jordan & Carolina Road, combined with special guests, deliver tunes that will have fans singing along for days. Those included in this special collection are the #1 Billboard hits “Ready For The Times to Get Better,” “Common Man,” “Dixie Road,” “Diggin’ Up Bones,” “I Got Mexico,” “Do You Want To Go To Heaven,” “Don’t Close Your Eyes,” and “Rose Garden.” In addition to recording individual tracks with Lorraine Jordan & Carolina Road, another highlight on the album is “Boogie Grass Band,” which was originally released by Conway Twitty in 1978, but was re-arranged by Lorraine Jordan and Bluegrass singer/songwriter Ronnie Reno, who is the host of Reno’s Old Time Music, airing on RFD-TV. Listen closely, because this track is full of country music legends, all lend their vocals on this upbeat anthem.
20
What's This
Advertisement