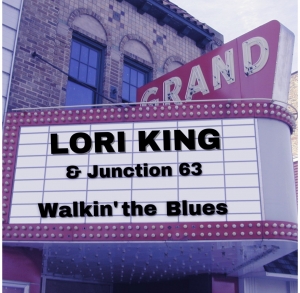 Lori King & Junction 63 release their debut album Walkin' The Blues.
For Immediate Release 6/4/21: Lori King & Junction 63 to release their debut album, Walkin’ the Blues, their first on Turnberry Records, with the featured song "Now There's You." The full album is now available for purchase in physical and the new virtual album formats, as well as streaming, download and will be sold at shows throughout their summer tour schedule. The album features a traditional bluegrass songs paired with gospel classics and the occasional acoustic twist on some country favorites.

“I’m so excited to finally share this album and our new featured song "Now There's You" with everyone. People don’t always think of the Midwest, when they think of bluegrass music, and I think this album will help them change their minds,” says King.

“We are thrilled that Lori King & Junction 63 are part of the Turnberry family of artists and we look forward to helping her develop and evolve as a female fronted bluegrass band,” says Keith Barncastle, President of Turnberry Records.

About Lori King and Junction 63:

Lori King & Junction 63 features Lori on bass and singing lead and harmony vocals. Her husband Joe King plays guitar and sings lead vocals. The band is rounded out with members, Kevin Amburgey who plays mandolin and sings, Mark Hargrove who picks the banjo and contributes vocals as well, and fiddle player Kyle Murphy. The band is based out of Drakesville, Iowa.

Lori King’s previous awards include the 2015 Midwest SPBGMA Bass Fiddle Player and Traditional Female Vocalist of the Year, and 2016 Female Vocalist. Lori is also the founder and Director for Lori King Productions. She previously directed the Bluegrass Music Association of Iowa and is a member of the International Bluegrass Music Association and a graduate of Leadership Bluegrass.


About Turnberry Records:
Based in Racho Mirage, CA, Turnberry Records & Management grew out of a desire to create an environment that would allow musicians and artists to reach broader audiences, without standing in the way of their future. By using flexible and inventive strategies, they are changing the game and allowing artists to create while remaining relevent in todays constantly changing business environment.
Learn more at www.Turnberryrecords.com