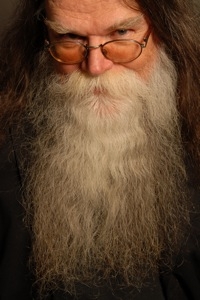 I was born under the same moon Bill Monroe used to wish on. I began to wear clothes and developed an interest in girls (both events happened when I was about 14). Saw Elvis on tv. Saw the Beatles on tv. Watched "Hootenanny" and "Shindig," watched the Porter Wagoner show and Flatt and Scruggs. One messed up kid. Went to all night gospels sings with my Dad, who figured since I was already there he might as well let me stay up. Learned to play the guitar. Played with gusto and enthusiasm and another kid from the neighborhood. Met a banjo player in college, who was posing as a student. He took the time to show me some bass runs and other notes of note, and together we tore through the learning curve. Met a couple of other like-minded layabouts, and together we formed the bluegrass band Chicken Hot Rod. Toured 26 states, playing mostly colleges, opened for Earl Scruggs, Blue Oyster Cult, Goose Creek Symphony, the Everly Brothers, had a blast. Chicken Hot Rod still makes music from time to time. I live in Nashville now, where the atmosphere is great for growing songs. Still writing, picking, and grinning, heavy on the grin. Waiting for Dolly to call.

"What Christmas is About" is a funny song about two competitive guys who live next door to each other...each wanting to outdo the other with their lavish amount of Christmas decorations. It's a white (trash) Christmas....at its finest!
4
What's This
Advertisement