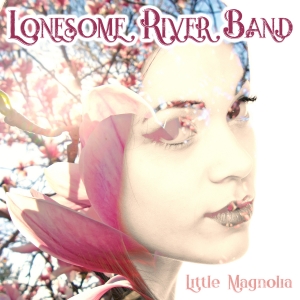 A waltz about love lost but not forgotten, Lonesome River Band brings their new single, "Little Magnolia." With lead vocals by mandolin player Jesse Smathers and with a power trio chorus with Smathers, Brandon Rickman and Barry Reed, this is Bluegrass at its high-lonesome best.
Written by Adam Wright and Milan Miller, it’s a new song that sounds like it was written in the golden age of brother duet-style harmonies.

“‘Little Magnolia’ is a favorite track of mine. It’s a song that sounds 80 years old,” says Smathers. “The feel of this song comes from a place of authenticity, something that we all strive for, and that made it so fun to record for all of us!”

Miller adds, “‘Little Magnolia’ is a tune that Adam Wright and I wrote on Thanksgiving Eve back in 2010. It seemed to just waltz into the room and twenty minutes later, we had a song that somehow felt like it had been around for years. Back when I was young and impressionable, the Lonesome River Band was one of the first groups to bend my ear toward bluegrass, and I am thrilled that ‘Little Magnolia’ is the newest addition to their timeless catalog.”

Listen to this bluesy three-quarter lament HERE (Link to be added).

About Lonesome River Band:
Since its formation 35 years ago, Lonesome River Band continues its reputation as one of the most respected names in Bluegrass music. Five-time International Bluegrass Music Association (IBMA) Banjo Player of the Year, and winner of the Steve Martin Prize for Excellence in Banjo and Bluegrass, Sammy Shelor leads the group that is constantly breaking new ground in Acoustic music. With two stellar lead vocalists, Brandon Rickman (guitar) and Jesse Smathers (mandolin), with impressive talents of Mike Hartgrove (fiddle) and Barry Reed (bass), the band seamlessly comes together, performing the trademark sound that fans continue to embrace.
8
What's This
Advertisement