Eric Lindell - Change In The Weather 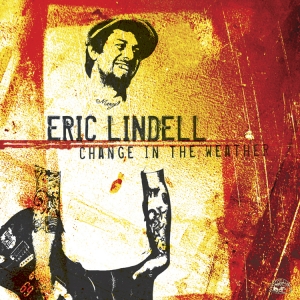 California-born, New Orleans-schooled singer/songwriter/ vocalist Eric Lindell is a roots rocker with dozens of original songs that combine soul-shaking rhythm & blues, reggae grooves, swamp pop and blues. Lindell is a fan favorite in his northern California turf and his adopted home of New Orleans (where he was featured on the cover of OffBeat magazine and performed on the main stage at the New Orleans Jazz & Heritage Festival). He is accomplished on guitar, harmonica, keyboards and bass, and has performed with some of the Crescent City’s top musicians as well as some of the jam band community’s biggest names (including members of Galactic). The winner of the 1999 John Lennon Songwriting Competition for his song Kelly Ann, Lindell is now ready to bring his rough-hewn voice and memorable original songs to the rest of the music-loving world with the release of his Alligator Records debut, Change In The Weather.

Change In The Weather will delight and surprise music fans hungry for an extraordinary, original artist who is just getting ready to explode. Lindell’s songs are cliche-free, completely original and yet have an instant familiarity to them. The laid-back grooves and hook-laden melodies hint of 1970s-era Van Morrison and Bruce Springsteen, but are not throwbacks as much as they are powerful, rootsy, thought-provoking and danceable contemporary songs. Traces of Stevie Wonder, Curtis Mayfield, Ray Charles and Sly And The Family Stone can be found in Eric’s originals, with foot-stomping grooves coming around every corner and horns punching in all the right places. Guests on the CD include War drummer Harold Brown, Ivan Neville and Galactic’s Stanton Moore.

Born in San Mateo, California, in 1969, the former “skate-punk” spent countless hours in San Francisco, soaking up the musical sounds of the city, eventually leading him to pick up the bass and then the guitar. Lindell listened to the music of Donny Hathaway and The Impressions as well as Buddy Guy. He discovered blues greats Junior Wells, Jimmy Reed and Albert King on his own before drifting toward the R&B sounds of Stevie Wonder, soaking up the soul and learning how to craft a song. After performing at bars on the West Coast with a few short-lived bands, Eric formed his own group in 1993 and quickly gained a loyal California audience thanks to countless performances and many late-night jam sessions. Established stars like Charlie Musselwhite and Tom Waits attended his gigs, as did overflow crowds of music fans.

Lindell left for New York in 1998, gigging there regularly before heading down to New Orleans in 1999, where he quickly discovered the roots music scene. He gravitated toward the West Bank dive bars of Gretna and Algiers, Louisiana, where he befriended many older swamp pop musicians, who helped him get more regular gigs. Before long he met up with Galactic’s Stanton Moore, and the two began playing together. Some of New Orleans’ finest players, including Harold Brown and drummer Johnny Vidacovich, often joined him on stage. Galactic bassist Rob Mercurio began sitting in as well, and word of Lindell’s immense talents began spreading around the city. Some of the city’s biggest stars began showing up at his gigs, embracing this fresh California kid’s funky music. Some of his famous friends and admirers include Branford Marsalis, The Neville Brothers, John Scofield, Chris Chew (North Mississippi Allstars), Vince Welnick (Grateful Dead) and Wally Ingram (David Lindley, Stockholm Syndrome). According to Lindell, “The fact that these amazing people are so complimentary to me and my music means the world to me.”

Lindell’s live shows draw as much attention as his material. His unstoppable grooves, rocking, deeply rooted, original songs and excellent musicianship always fill the dance floor. With the release of Change In The Weather, Lindell and his band will tour heavily, giving the rest of the country the chance to discover for themselves what a growing number of people already know: Eric Lindell is a musician bursting at the seams with talent, with enough original songs and inventive grooves to carry him as far as he chooses to go.