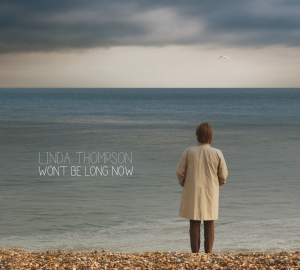 When Linda Thompson sings "I care only for myself / Love's for babies and for fools," you'd be forgiven for believing the conviction in the siren's sterling voice. But if there's one thing that defines her new album, 'Won't Be Long Now,' it's love; love for her family, her collaborators, and her art.

It's been six years since we last heard from Linda Thompson, a relatively short wait considering there was a time when many, including Linda herself, thought she'd never sing again. After rising to international acclaim in the 1970's with a string of albums with her then-husband Richard that remain undisputed classics of the singer-songwriter genre (including Rolling Stone's #9 album of the 1980s, 'Shoot Out The Lights'), a rare vocal disorder forced Linda to retire from performing and recording. Nearly two decades later, she made a triumphant return with 2002's 'Fashionably Late,' which was hailed as "a marvel of modern folk" by The New Yorker, and followed it up in 2007 with the "absolutely stunning" (NPR) 'Versatile Heart.' The third in a trilogy marking her "bona fide comeback" (WSJ), 'Won't Be Long Now' stands as the most potent and affecting album of Thompson's incredible late-career resurgence.

Recorded primarily in New York City in addition to studios in Scotland and London (including the famed Abbey Road), the album's ten tracks feature contributions from three generations of Thompsons. "As Fast As My Feet" kicks off with gorgeous vocals from Linda's children—Kami, Teddy, and Muna—while her teenaged grandson Zak Hobbs plays lead guitar on the track alongside Richard's youngest son, Jack, on bass.

The late Kate McGarrigle also played a key role in headstrong opener "Love's For Babies and Fools," which finds Linda and Richard recording together for the first time in a decade. The song was originally inspired by McGarrigle's son, Rufus Wainwright and, at McGarrigle's urging, Linda recorded it. "Kate liked it and pushed me to finish it shortly before she died," Thompson remembers affectionately. "She wasn’t much given to compliments, so I did as I was bid."

The song embodies many of Thompson's greatest strengths, from her achingly vulnerable vocal delivery to her trademark fatalist wit. It was the latter that attracted her to the record's title track, "It Won't Be Long Now," a musing on mortality penned by her son Teddy.

Won’t Be Long Now mixes intimate meditations with timeless ballads—both old and new—steeped in the British folk tradition Thompson cut her teeth on. Tracks like "Mr. Tams" sound as if they could have been penned centuries ago, though Thompson only recently wrote it with Teddy in tribute to famed folk musician and family friend John Tams. How perfectly it sits alongside "Paddy's Lamentation," which is in fact a 19th century Irish song resurrected by Thompson and recorded for the 'Gangs of New York' soundtrack, is a true testament to her gift for channeling the ageless art of the folk ballad.

In addition to the love and encouragement from her family, Linda also drew strength from beyond her own bloodline, turning to an all-star cast including Ron Sexsmith, Amy Helm, Sam Amidon, and Tony Trischka for some of the record's finest collaborations.

"I love Ron Sexsmith," says Thompson. "He's an amazing guy who just writes all day and all night. You send him some lyrics and he comes back in half an hour with a great tune."

"If I Were A Bluebird," Thompson and Sexsmith's co-write, is yet another track that sounds as if it could have come from deep within the annals of British folk history, but it was in fact composed via email between the two. "It's a very, very trad notion," Thompson says of the song's imagery. "I often have this feeling, I think everybody does, of wanting to escape. Sometimes you just want to get away from it all, and that comes out in the writing. Besides, you can't write love songs at my age," she adds with a laugh. "It's unseemly."

Thompson also took the album as an opportunity to modernize some older tales like "Blue Bleezin' Blind Drunk," a traditional song about an abused spouse. Linda wrote a new verse for the song.

"I come from Glasgow," Thompson says of her choice to adapt "Blue Bleezin' Blind Drunk." "It was a very poor town and there was a lot of drinking there, and a lot of women were treated the way the woman in the song is. It wasn't a crime at the time and you could get away with whatever you wanted. It must have been so hard."

Perhaps the most notable aspect of the track is the round of applause at the end, signaling this as one of Thompson's few live recordings to be officially released. It is a reminder of why Rolling Stone called her "one of rock and roll's finest voices."

"I played it for my daughter, and she said, 'I can't believe that's live,'" remembers Thompson. "I was so surprised when I heard it."

It won't come as any surprise for longtime fans, though, who undoubtedly remember the exquisitely soulful voice that makes the track, and indeed the whole album, such a magical addition to an iconic career once silenced by pain, now brought back to life by love.