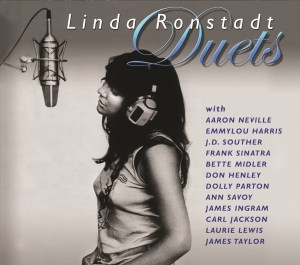 15-Song Collection Spotlights Many Of The Pioneering Singer’s Most Memorable Collaborations, Including Aaron Neville, Emmylou Harris and James Ingram
As Well As One Previously Unreleased Duet With Laurie Lewis

Available April 8, Days Before Her Induction Into the Rock and Roll Hall of Fame

LOS ANGELES – Linda Ronstadt is one of the most popular and versatile singers in all of music, bridging multiple genres and styles with great success. She has a long history of collaborations with such varied artists as Aaron Neville, Emmylou Harris, Don Henley, Frank Sinatra, James Taylor, Dolly Parton, James Ingram and more.

Rhino brings together 14 of her most memorable musical partnerships, along with a previously unreleased collaboration with Laurie Lewis, for a new collection that was created with help from Ronstadt and her longtime manager, John Boylan. LINDA RONSTADT DUETS will be available on April 8 for a suggested list price of $11.98.

The album will arrive just days before Ronstadt is inducted into the Rock and Roll Hall of Fame on April 10. The honor recognizes her role as a pioneering female artist and pays tribute to her exceptional musical legacy, which has earned 10 Grammy® Awards, two Academy of Country Music Awards and one Emmy®. Last year, Ronstadt released her best-selling memoir Simple Dreams and also revealed that she had been diagnosed with Parkinson’s disease, which left her unable to sing. Although her singing voice may have been silenced, this collection shows why her songs never will be.

Several songs on this collection are also Grammy winners. Ronstadt won her first in 1976 for a cover of Hank Williams’ “I Can’t Help It (If I’m Still In Love With You)” that featured Emmylou Harris and appeared on what many consider her masterwork, Heart Like a Wheel (1974). Another Grammy-winner featured on DUETS is “Somewhere Out There,” which Ronstadt recorded with James Ingram in 1986 for the soundtrack to An American Tail.

DUETS also includes two of her most successful collaborations, both of which feature Aaron Neville. The Grammy-winning songs “Don’t Know Much” and “All My Life” originally appeared on Ronstadt’s triple-platinum album Cry Like a Rainstorm, Howl Like the Wind (1989).

In 1976, she and Don Henley sang the Warren Zevon-penned track “Hasten Down The Wind,” which was the title track to Ronstadt’s Grammy-winning, #1 album. It was her third consecutive million-selling album, an accomplishment no other female artist had achieved at that point.

DUETS also spotlights a number of Ronstadt’s more recent collaborations, like “Sisters” with Bette Midler, which appeared on Bette Midler Sings the Rosemary Clooney Songbook (2003). That same year, Ronstadt partnered with Carl Jackson on “The New Partner Waltz,” for the Grammy-winning tribute album Livin’, Lovin’, Losin’: Song of the Louvin Brothers. DUETS also includes three tracks from Adieu False Heart – a Grammy-nominated album Ronstadt recorded in 2006 with Cajun-music singer Ann Savoy – including a cover of the 1966 hit, “Walk Away Renée.”

1. “Adieu False Heart” with Ann Savoy
2. “I Can’t Get Over You” with Ann Savoy
3. “Walk Away Renee” with Ann Savoy
4. “The New Partner Waltz” with Carl Jackson
5. “I Never Will Marry” with Dolly Parton
6. “Pretty Bird” with Laurie Lewis*
7. “I Can’t Help It (If I’m Still in Love With You)” with Emmylou Harris
8. “Hasten Down The Wind” with Don Henley
9. “Prisoner In Disguise” with J.D. Souther
10. “I Think It’s Gonna Work Out Fine” with James Taylor
11. “Don’t Know Much” with Aaron Neville
12. “All My Life” with Aaron Neville
13. “Somewhere Out There” with James Ingram
14. “Sisters” with Bette Midler
15. “Moonlight In Vermont” with Frank Sinatra