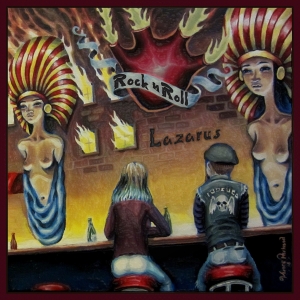 Ya see, I fell in love and figured, that was that. I retired from my roaring twenties, happy to be alive and settled in, wholeheartedly, to domestic bliss. But A decade or so (and a few kids and grey hairs) later, I started having trouble sleeping thru the night. I feel like I live right. I've always felt blessed and that, I emanate from the Source. I've been given the greatest gift a man can be given, and that's a soul mate, my other half, my better half. We did our part to contributing to the perpetuation of the species by squirting out two fine young girls who occasionally even show some promise and, that there may be some hope for the future...


I just had this angel whispering in my ear... calling me to service, "wake up now Lazarus because today might be the day, be the day."


Well ****, many are called and, yet, so few answer... So, I packed up the wife and two kids, the three cats and two dogs and whatever we could fit into the U-haul and moved the family from the cold confines of Northeastern Ohio...


Anyway... somehow, we found ourselves in Austin, Texas and I've been embraced by its amazing music scene and proud culture. And I try my best to do the lord's work.


I've had the great honor and pleasure to join the, Grammy Nominated, Libby Koch band in early 2016 to help support the release of her Grammy Nominated Record, Just move On.


With a bag full of tunes and wishful thinking, I teamed up with the amazing artist, multi-instrumentalist and producer Kris Brown this past November to produce my debut record, Rock n Roll Heart.


​Recorded at King Electric Studios with Engineer and bad Mamma Jamma Justin Douglas, this record truly embraces the sound and feel of austin and features some of austin's best... including Warren Hood, Libby Koch, Ed miles, Mark Wilson and Many, many more..
6
What's This
Advertisement