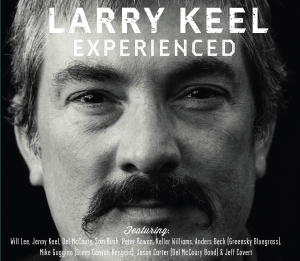 Larry Keel is described by some reviewers as the most powerful, innovative and all-out exhilarating acoustic flatpicking guitarist performing today. Keel has absorbed the best lessons from his Bluegrass family upbringing, both sides deeply steeped in the rich mountain music culture and heritage of Southwest Virginia. From there, he has always integrated that solid musical grounding and natural-born talent with his own incomparable approach to flatpicking the guitar and composing original music. He's also got a knack for choosing interesting and appealing material from all realms of music with guts, whether it's a tune written by a fellow song-writer/musician friend, or a tasty cover from any number of genres all over the map. The combination is pretty irresistible, and has earned Keel the highest respect and billing among the top acoustic musicians alive, and some now gone: Tony Rice, Chris Thile,Vassar Clements, Sam Bush, Del McCoury, John Hartford, Bill Monroe, Peter Rowan, and Darol Anger to name a few. And his fierce, high-spirited energy also appeals to young rockers, jammers and alt country pickers and fans who are equally drawn to Keel’s deep rumbling voice, his earthy and imaginative song-writing, and his down-home-gritty-good-time charm. Keel regularly collaborates with JamBand and Rock giants Yonder Mountain String Band, Keller Williams, Jorma Kaukonen, David Nelson, Little Feat, Rebirth Brass Band, Dirty Dozen Brass, Railroad Earth, members of String Cheese Incident and Leftover Salmon, amongst others.
Keel has a variety of musical formats swirling around the calendar each year: look out for his core band, The Larry Keel Experience (featuring Will Lee on soulful, blues-grass 5 string banjo, penetrating vocals and exceptional song-writing contributions and Jenny Keel on upright bass, with impeccable timing, solid yet imaginative bass lines and vocal harmonies), Larry Does Jerry (Keel performing the music of Jerry Garcia), Keller Williams and The Keels, Jeff Austin and the Here and Now (featuring the Keels), Keel paired with artists such as Drew Emmitt, Danny Barnes, Peter Rowan, Sam Bush, and a multitude of guest spots in great bands on the tour circuit: Traveling McCourys, Steep Canyon Rangers, Infamous Stringdusters and Greensky Bluegrass, to name a few.
Throughout his career, Keel has released 14 albums and is featured on 10 others. The most recent release, March 2012, is CLASSIC, the 3rd album recorded by Keel and his powerhouse ensemble, Natural Bridge. The project is filled with originals written variously by Keel, the band members or by musician/song-writer friends. Keel recently launched a new event concept and website, Fishin and Pickin, which combines 2 unique but thoroughly complementary pleasures: the satisfying thrill of sports fishing, and the energizing intensity of live music. The musician fisherman or even the fishin music-lover will find up-to-date, useful and amazingly entertaining music tips, tablature, show calendars and links to like-minded acts and artists, plus new music downloads. Larry’s also been involved in the development of Fishin N Pickn Workshops and Camps, hosted on live water properties, that teach pickin musicians how to advance their ‘chops’ on their instruments, and having the chance to catch some big fish in the process. Bass and Grass has been taking place in Georgia each year in the fall, always with a fantastic roster of musician-instructors, and outstanding bass fishing! Similarly, Keel hosts Trout and Tunes in May each year, featuring fishing styles and mountain-music study and entertainment all set in the misty mountains of West Virginia.