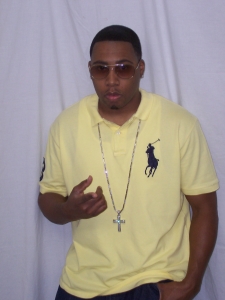 In every era of time, something new and refreshing makes its debut. Bringing forth something to talk about and to listen to.
L-ement, a 27 year old R&B artist from St. Louis, MO, perfectly fits that description. L-ement, also known as Corey Gavin,
originally hails from a small town in the mid-south called Osceola, found in the natural state of Arkansas. One minute he
will move the dance floors, the next, falling in love with one of his sexy love ballads.

L-ement comes from a musical family, his father was a disc jockey for local clubs, and his mother used to sing in a gospel
group. So he had no other choice, but to love music. But of course music was not his first love, L-ement first love was bas
ketball. His childhood dream was to become an NBA player, but destiny took its toll. During all those times that he was
practicing hard to fulfill his NBA dreams, secretly he was always singing and tuning his voice. He used to always listen to
songs while he was in church and thinking to himself that he could do that, and saying they should have did this note like
this. But L-ement was always a shy person, nobody never new he could sing, he always kept it to himself.

L-ement recalls when he was a kid, of his father buying himself a keyboard. He used to tell him and his brother that this
thing is not a toy, don't play with it. Just like any other kid, L-ement would wait for his father to go to work and he would
play around with it, and that’s where the magic began. L-ement instantly fell in love with a keyboard. R&B music was a
big influence on L-ement. He recalls listening to Marvin Gaye, Stevie Wonder, and Michael Jackson songs, listening
to how they stack their harmonies and how they sculpted songs. That’s how L-ement learned how to perfect his craft.
His parents could not afford to pay for singing lessons, so he taught himself how to carry his notes and stack his harmonies.

After L-ement graduated high school he moved to St. Louis, MO. That’s were he blossomed and came out of his shyness.
He saved up enough money to buy himself a workstation keyboard, that’s when he started making his own music and writ-
in his own songs. He later found a manager that sculpted him and got him into talent shows and talked him into making
demos. Like any other successful artist, L-ement had his moment of misery. That would come when he tried out for The
American Idol competition. He remembers getting up there and singing Stevie Wonder's, Ribbon in the Sky. He remembers
the other contestants completely getting quite when he started singing and when he was done they gave him a great applause.
But unfortunately it was not enough for the judges. He would never forget those agonizing words, "YOU HAVE A GREAT
VOICE AND YOU REALLY HAVE TALENT, BUT THATS NOT WHAT WE ARE LOOKING FOR THIS YEAR". That phrase
crushed L-ement and it replayed in his mind over and over again. He made a promise to himself that they would definitely
one day remember his face and voice. So that made him work even harder toward his music career.

L-ement started doing demos and sending them out to record companies, but they turned him down. So he got tired and
frustrated with that and said, "you know what, I am going to get my own company and put myself out independently and make
the majors come at me". So that’s when he started working on his soon to be released self-titled debut album, L-ement (element).
This album punctuates and capitalizes on L-ements production and vocal ability. L-ement is definitely one of those artists that
can not be slept on. He is the next hottest R&B artists, and the next artist to set the billboard charts on fire. So keep your eyes
and ears open, because he is definitely on his way.