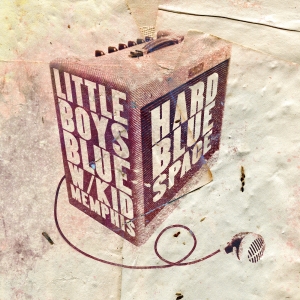 
What happens when ace blues guitar player John Holiday (aka Kid Memphis) from Memphis who played the acting role of Carl Perkins in the 2005 major motion picture “Walk The Line,” collaborates with JD Taylor, a Jackson TN native and one that actually played harmonica on gigs with the Rockabilly legend himself? Well, it’s a story to be told and it’s in the songs of the latest release from the LITTLE BOYS BLUE album featuring John Holiday aka Kid Memphis…These 10 original tracks give evidence that some of that Southern Sun Memphis Rockabilly Blues mojo heritage rubbed off in the right places and mainly on this latest release named “Hard Blue Space” to be released on the Vizztone Label. Little Boys Blue is made up of Drummer Mark Brooks, Bass player Dave Mallard, vocalist harmonica player JD Taylor and guitarists John Holiday, and Alex Taylor Also guest guitar and slide players Andrew White, Wes Henley, Brad Webb along with Dave Thomas on keys contribute to the project. This album nails the epitome of southern Blues and Americana. With most of the tracks recorded at Highland House Studios, Jackson TN and the final Mix and Master done by Don Srygley (Gregg Allman, Fame Studios).

LITTLE BOYS BLUE had its origins twenty-something years and many gigs ago, when singer/harp player JD Taylor and guitarist Steve Patterson started the Jackson,Tennessee based band LITTLE BOYS BLUE. Enlisting an array of veteran players, who toured with Nashville country and Sun Records Rockabilly artists, they mixed all their influences from Tennessee and Mississippi Delta Blues styles with flavors of Rockabilly, Rock and Country to create the Little Boys Blue sound.

Sometimes working as a duo, Taylor and Patteson became friendly with Rockabilly legend Carl Perkins, and often backed him up during book signings and events. The group played blues clubs, festivals and competitions throughout the southeast. In 1997 they won third place in the Blues Foundation’s International Blues Competition.

In 2002 Taylor started traveling to Nashville, where he became part of Nashville’s Music Mafia, playing shows with John Rich, Gretchen Wilson, Hank Williams, Jr, and Kid Rock, and recording with Warner Bros. artists including Blake Shelton. After about five years, JD was drawn back to Jackson, Memphis, and his first love – the Blues.