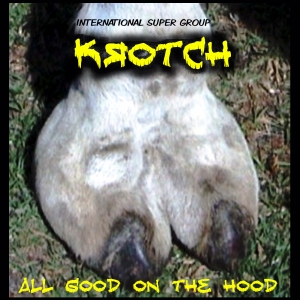 For 20 years , I have been reviewing all kinds of music, but when Terry
Copley, CEO of Local Scene Records, handed me the "Krotch" album, I asked
myself "why me"?

With anticipation and some doubt, I put the Cd into the player. Local Scene
Records had just released an album titled "All Good On The Hood" by the
International super group "Krotch". The name of the band and the title
gave me the impression that this was an album that was doomed to never be
heard by anyone. I secured myself in my listening room by myself. By the
end of the album, I was laughing, horny and for some strange
reason....naked ! We live in a time when we have to take a break from
reality and give ourselves a laugh. A laugh with one of the most "taboo"
subjects that as children we were taught not to talk about and that is
sex. "Krotch" made it so daring and fun accompanied by the best hard rock
grooves I have not heard in quite some time. From the first track, "I'll
love you when your on your knees", lets you know that your in for the
"ride" of a life time. How such talented band came up with this concept is
beyond me, but I have to say I'm am glad they did. This album is so well
produced, written and performed that I could not stop listening and had to
find out what was going to happen next. With songs like "Thrust A Must"
and "Babes Don't Have To Do Sh*t", I was impressed with how these "taboo"
subjects were presented and I have come to the conclusion that these are
not "Taboo" subjects at all, but is everyday life and thoughts for those 18
and over. The band is made up of musicians with such names as Tee-Sack,
Brian Balls, Bobby Balls ( Brothers?), C.U. Downunder and Pressed In Nash.
They strike me, on many levels, as the long lost cousins to Spinal Tap. The
Cd introduces many flavors of hard rock and great mixes that any club D.J.
would love to get their hands on and places in their mixes. Its a roller
coaster of cheap thrills (The kind you love) with such powerful songs as
"Awe", "Grind Like You Mean It" and " Show Me Your Pups". This album is
really a must have for the daring, the shy, the
lonely and the rebellious lot and especially for those who love songs
about the sexy things in life. It's not everyday that a band like 'Krotch"
on a Cd titled "All Good Under The Hood" get a chance to be heard, but my
feeling is that this is what the BIG industry guys hide from the general
public; The real music about real things in life and the pure joy of being
human. "Krotch" is not only a band of "Odd Balls" ( pun intended) that
puts Spinal Tap on notice, but they are also film makers! "Krotch" has
produced a movie, as well as videos of their most popular songs.One of them
is featurd on the record label website. Ok, so as I listen to the Cd, you
must wonder what they look like.....well...they are everything you would
expect them to be and in some ways more. Rock parody has its stars like Tap
or even the Monkees, but these guys go all out in their fully produced
videos. They are really quite entertaining and hold no bars from going to
the top; In fact, over the top. So after the final songs played out on the
"All Good On The Hood" album, I found my self refreshed, kinda
embarrassed because of its "Taboo" themes and I somehow ended up naked.
This is not a dirty rap / sex album, but one that you can share with
friends and have a laugh and an "I've done that too" moment. With all the
puns and lyrics aside, ( which is not all that bad really and done in good
taste and as a matter of fact; I love the direct aproach),
I give my recommendation to purchase this album for the fun, the over the
top factor and most of all a great tone, musicianship and incredible
talent and a vision to take on a topic that is on everyones mind. This
"Super band" hails from parts unknown. With that said, I do detect a
slight British accent in their singing. I am now a fan of this band. For
the "Balls" to do what they have done is amazing, yet I find I would not
have expected anything less from a band called "Krotch".
Yes, they are rock stars and they know it. Sooner or later, everyone looks
at the "Krotch". Its time to look at theirs from Local Scene Records.
www.localscenerecordlabel.com