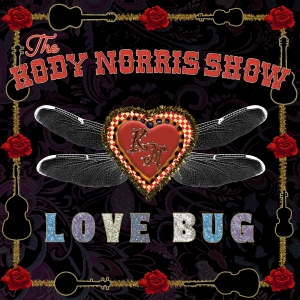 
Colorful, traditional bluegrass band The Kody Norris Show is set to premiere their debut Rebel Records single, “Love Bug,” August 21. As a songwriter and front-man, Kody Norris weaves his love for words and literature with clever wit and genuine emotion. The memorable tune bounces along and takes a humorous look at falling in love and the commitment of marriage. For Norris, the lyrics are based in true life as he recently got bit by the love bug and married his sweetheart and fellow band member Mary Rachel Nalley.

Norris shares, “In the year leading up to our wedding I would often find myself humming this catchy little melody. While on tour in west Texas I was driving the bus at about 2am when the first verse and chorus began to take shape. I finished the song during some down time while in the studio working on a completely different project. To the best of my recollection the first live performance was actually on our wedding night when we left our reception for a two hour detour to Bristol to perform on a ‘Farm Fun & Time’ Package show as a part of the Bristol Rhythm & Roots Reunion Festival. The crowd went crazy and I knew right then I HAD to record this song because the Love Bug had officially taken flight!”

“Love Bug” is the first release from the forthcoming Rebel album All Suited Up. The foursome is fronted by Norris on guitar, with his “little sweetie,” Mary Rachel Nalley-Norris on mandolin and fiddle. The band is rounded out by Josiah Tyree on banjo and ‘Cousin’ Charlie Lowman, who recently joined the group on bass.
17
What's This
Advertisement