Kody Norris Show - All Suited Up 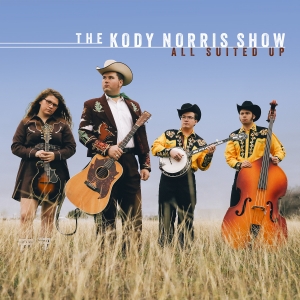 Although he is only in his early thirties, Kody Norris is a seasoned veteran on the bluegrass circuit, having spent more than half of his life in the spotlight. He grew up listening to the music of pioneers such as the Stanley Brothers, Bill Monroe, and Jimmy Martin, and began picking and singing at age ten. By the time he was fifteen he was performing professionally, and by age twenty he had mastered several instruments, was an accomplished songwriter, and was leading his own band.

Today The Kody Norris Show is one of the busiest, hardest working, and most entertaining bands in bluegrass. The group combines musical virtuosity with humor and showmanship in a throwback to the glory days of the Grand Ole Opry. Completing the visual package, the members sport dazzling sequined suits, hats, and custom made cowboy boots. Front man/lead singer/guitarist Kody is joined by his wife Mary Rachel Nalley-Norris on fiddle and mandolin, twenty-year-old banjo phenom Josiah Tyree, and newest member “Cousin” Charlie Lowman on bass. Having previously recorded a handful of successful self-produced albums including 2017's award-winning When I Get The Money Made, the group signed with Rebel Records in 2020.

Their debut Rebel release All Suited Up weaves classic themes with youthful creativity and modern sensibility. While some bands honor their mentors by reproducing great music of the past, The Kody Norris Show inhabits traditional bluegrass and confidently carries it forward. Kody's terrific original songs are a prime vehicle for this. “Kentucky Darlin'” is a driving declaration of love to Kody's “little sweetie” that features lush twin fiddling by Mary Rachel and guest Jason Barie. The bouncy “Love Bug” playfully continues the theme with clever lyrics and lively instrumental interplay, and is destined to be a fan favorite on live shows. “Let's Go Strollin,'” a heartfelt tribute to lifelong love featuring gorgeous twin fiddles and trio harmony, completes the trilogy.

On the darker side, Kody delivers the honky-tonk ballad, “Lady of the Evening,” a powerful duet that features Josiah's soaring tenor harmony and bluesy banjo accompaniment. Likewise, the spine-tingling murder ballad “In the Shade of the Big Buffalo,” from the pen of Oklahoma bluegrass patriarch Bill Grant, is sure to raise chill bumps. The tension between old comforts and new challenges is a recurrent theme in bluegrass that gets an update through Kody's skill at finding great new and obscure material. He discovered “Ole Carolina” years ago on an album he found in an antique shop and thought it was one of the prettiest songs he'd ever heard. Its nostalgia for home is echoed in “I'm Going Back to the Mountains” and “Virginia Bound,” both perfectly suited to Kody's sincere and compelling high-lonesome vocal delivery.

All Suited Up is a stunning label debut that showcases The Kody Norris Show's neo-traditional virtuosity, creative energy, and passion for the music, and it will exponentially expand the band's already enthusiastic audience.
39
What's This
Advertisement