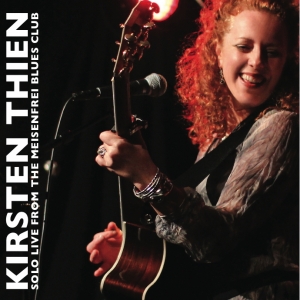 “I saw her over the weekend, and she blew me away, it was unbelievable! The album is flawless. She’s gonna be a BIG, big star.” ~Pat St. John, DJ, Sirius/XM Radio

“I had the chance to see Kirsten Thien last week at the Triad Theater in Manhattan, and she burned it up….really nothing but praise for her.” ~ Eric Holland, DJ, WFUV 90.7 FM (NY)

“This fire-haired songwriter’s voice strikes a perfect balance between the precise but homey crooning of Bonnie Raitt and the sheer incendiary power of Janis Joplin…Too macho for a taste of estro-rock? Delicious will have you asking for seconds.”
~ Stephen Fortner, Keyboard Magazine

“Kirsten Thien’s stock in trade is modern blues infused with soul and rock. She’s a lithe, composed vocalist, inclined to use her attractive voice to elevate rather than plumb lyrics in songs she’s written about sensual love.”
~ Frank-John Hadley, DownBeat Magazine

"The tracks are hot, the vocals are even more smokin’. A most highly recommended album!"
~ Steve Jones, Blues Blast Magazine

Rarely does a major talent like Kirsten Thien come along with the vocal chops and ability to express the profound feelings of women. When it is accomplished so effortlessly with grace, intelligence and artistry, it is a musical event of major importance to be celebrated and further anticipated.

She opens with the soulful, gently swaying “Hold Onto Me,” her propulsive acoustic guitar the perfect rhythmic and tonal accompaniment to her gorgeous vocal instrument, melting hearts with “Hold onto me, baby I'll show you. If you see anything that you want, I’ll get it for you.” “A Woman Knows” floats on a supple, insistent chord vamp with Thien soaring passionately in the chorus, her voice dramatically rising in pitch “...and you can… count... on, you can count on me. ‘Cause a woman knows when her love is meant to be.” Easing into a saucy funk groove on “Thank You (for Saying Goodbye),” she attests to the truth that when one door closes, another opens, in a creative, dynamic arrangement implying a sound bigger than the sum of its lone instrumental part. The hypnotic “You’ve Got Me” stuns with the aching imagery “Tracing your face with my hand, I see you, but you can’t see me from where you stand. Crying out but not too loud, you’re too shy, well, I’m too proud to break through oh, to you.”

Thien owns the Ida Cox classic “Wild Women Don’t Have the Blues” and engages the audience in call and response, thumping her axe commensurate with the lyric content. “The Sweet Lost and Found” finds her chugging the blues with sensual syncopation while presenting the unique metaphor “The sweet lost and found is a place you can go when every place else is out of reach” for finding peace and joy on the journey. On the autobiographical “Ain’t That the Truth” Thien delivers the disarming broadside “My heart will overcome all reason, or doubt when it comes down to you,” the chords and musical rests adding drama to her devastating performance. Jacking up the energy with the Bob Dylan classic “It Takes a Lot to Laugh, It Takes a Train to Cry,” Thien digs into the evocative country blues lyrics with unvarnished grit and sass while powering the shuffling progression like a hot rod Dodge. Getting further down in the alley, her street cred in full evidence, Thien colors dark cerulean on the heavy Delta blues “Please Drive,” a Thien-penned tune previously recorded with the late blues guitar legend, Hubert Sumlin.

In an unexpected cover of a Sheryl Crow song, Thien introduces the Pop song “Leaving Las Vegas” putting forth that it’s the lyric of the song, not the music, that reminds her of the blues. The tragedy and desperation of this song are palpable with her voice rising and falling with defiance as she evokes the hurt and disappointment life sometimes serves up. “Nobody’s Ever Loved Me Like You Do” accentuates the positive in a relationship with the poetic “If a ship needs an anchor to keep from drifting at sea, I’ll hold onto you my love, you provide that stability. I don’t need to get too existential about what you mean to me.” Sequencing with wit and logic, Thien follows with the Sippie Wallace classic “Women Be Wise,” performed with the wisdom of warning the ladies against too much "whiskey and conversation" or “advertising” the virtues of your man.

Showing unfailing taste in covers, her hip version of Elvin Bishop’s pop hit “Fooled Around and Fell in Love” is a knockout via her additional lyrics that casts the cavalier male tale from a woman’s point of view with a stunning vocal that will have Mickey Thomas grinning. Likewise, her choice of Freddie King’s “I’d Rather Be Blind” throbs with smoldering instrumental and vocal intensity as Thien makes you believe she really would go anywhere, do anything to keep her lover by her side. Encoring with a brilliant medley of “Ain’t No Sunshine/The Thrill is Gone,” she underscores her uncanny ability to cut to the emotional center of a song while revealing even deeper aspects.

Like a comet, vivacious singer Kirsten Thien has blazed across the firmament with a series of gender and genre-smashing albums featuring electric backing while laying claim as the new “wild woman of the blues.” With her first live solo album she now adds “woman with guitar” in the manner of legendary Memphis Minnie, taking a spellbound audience on a musical journey through the rigors of life and romantic love with 16 originals and poignant covers.

COMMENTS FROM KIRSTEN
“I had no idea what to expect. The Meisenfrei is a big club, they’re used to loud, hard-rockin’ full band concerts. Setting up all by myself on a drizzly Tuesday night was a little unnerving. But when I came back out at show time and the crowd was there, I knew it would be a special night. Ronnie [Meisenfrei’s sound man] handed me a stereo mix at the end of the night and I was elated just to have a souvenir of what was a very fun and pivotal show for me. When I listened to the recording after I got home, my excitement grew. I felt that I was right back in the room. We had captured this moment in time that already had a special place in my heart and mind.”

BIOGRAPHICAL INFORMATION
Kirsten Thien’s unlikely path from a Georgetown University Business School graduate to a Blues and Roots Rock singer/songwriter began when she decided to forgo life on Wall Street for a career in music. Since then she has released three full-length albums, toured the USA extensively, opened for Dickey Betts, Shawn Colvin and Buddy Guy, and headlined two European tours with more to come in 2013.

In 2013, Kirsten Thien will hit the road touring in the US and Europe in support of this solo live album. In July Thien will conduct a solo tour through MO, OK, TX, LA, MS, AL, & NC including several venerable blues stops like Knuckleheads KC (July 18), Seeley Flats in San Angelo, TX (July 22 & 23), and Capitol Oyster Bar in Montgomery, AL (August 1). Other dates include Tall City Blues Fest in Midland Texas (July 27); Swing Wespelaar Festival in Wespelaar, Belgium (August 18); and a Premier event in London (August 13) with The North American Guitar; more announced soon.