The Kinsey Report - Edge Of The City 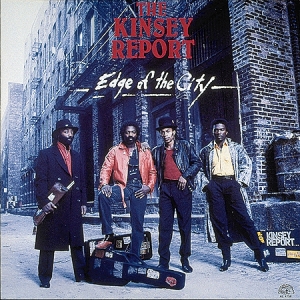 When a blues band works and sweats together for a lifetime, they develop a special kind of musical communication. On stage or in the studio, each member seems to telepathically know where the others are going, and the entire unit responds like a perfectly-tuned Porsche.

The Kinsey Report plays scalding contemporary blues with exactly that sort of psychic teamwork. Brothers Donald, Ralph and Kenneth Kinsey and best friend Ron Prince have been making music together for most of their lives, and their incendiary attack is a product of those years of unity. Their music is fired by their youth and burning creativity, and fortified with the tough, urban grit of their steel-powered Gary, Indiana hometown.

"If you work with guys for a long time, you develop a sound of your own," explains Donald. "We know each other's styles so well, we can just about feel where each of us is going. Everybody knows everybody's approach, so it flows a lot easier. There's less talking and more playing."

From their childhood, the Kinseys were prodded into the blues by their father, transplanted Delta slide guitarist, harpist and Gary legend, Lester "Big Daddy" Kinsey. Oldest brother Ralph was banging away on a parade snare while still a toddler, and Donald was hot enough on guitar by age 13 to be gigging regularly around Gary as "B.B. King, Jr.'' By the mid-'60s, Big Daddy had his two teenage sons backing him up every summer on barnstorming tours across the South. Kenneth, a full decade younger than his brothers, was virtually predestined to round out the family rhythm section.

But the family act split up in 1972. Ralph enlisted in the Air Force while Donald hit the road at 19 as Albert King's rhythm guitarist. Donald remained with King into early '75, backing the master of the Flying V on the Stax album, I Wanna Get Funky and a live Montreux Festival recording.

Shifting musical gears in 1975, Donald, Ralph and former King bassist Busta Jones ventured into the rock arena, forming a power trio called White Lightnin'. With Felix Pappalardi (of Cream fame) producing, the group cut an LP in Memphis for Island Records. They opened for a litany of major rock acts nationwide, but the trio disbanded the following year.

Donald's friends at Island had turned him on to the burgeoning reggae scene, and Peter Tosh was so knocked out by Donald's guitar that he invited Donald to join the Tosh band. Their enduring relationship resulted in three Tosh albums (Legalize It, Bush Doctor and Mama Africa, which contained a hit revival of “Johnny B. Goode” arranged and co-produced by Donald), and a tour as opening band for The Rolling Stones.

Reggae superstar Bob Marley also loved Donald's sound, and recruited the guitarist into The Wailers in 1976. Donald's bluesy licks were an integral part of Marley's acclaimed Rastaman Vibration album, and Donald played with Marley on tours across the U.S. and Europe. Donald even lived in Kingston for a time, but returned home after nearly being shot during an assassination attempt on Marley's life.

Ralph and Donald teamed with Chicagoan Ron Prince in 1978, and they relocated to the Bay Area to form their own "rooted rock" band, The Chosen Ones. Ron's resume already included stints with The Brighter Side of Darkness, Syl Johnson and Bobby Rush. The Chosen Ones cut an EP for Faulty Records and played the West Coast extensively before managerial problems scuttled the group in '81.

The current edition of The Kinsey Report really came together in1984. Ralph and Donald returned to Gary to back up Big Daddy. Kenneth was now ready to assume his rightful spot on bass, and Ron took over on second guitar. With Big Daddy squarely up front, the aggregation packed a double wallop, combining the Delta tradition with a funky modern sound, and they soon hit big on the competitive Chicago club circuit.

That same year, Donald produced his father's excellent debut album for Rooster Blues, Bad Situation . With stellar backing from The Kinsey Report, Donald is quick to cite his father's enduring influence. ''My dad's input, his support in what we're doing, has really been a key factor," Donald explains, adding that, even though The Kinsey Report is now recording on its own, the family patriarch will remain a prominent feature of their live shows.

In January of 1987, The Kinsey Report's contribution to Alligator's New Bluebloods anthology, Corner of the Blanket, provided a sizzling hint of things to come. Alligator president Bruce Iglauer was impressed enough to bring Roy Buchanan around to hear the band, and Roy asked Donald to handle the rhythm guitar parts on Roy's most recent albums, Dancing On The Edge and Hot Wires.

All that recording activity has dramatically increased The Kinsey Report's international following, and in October of '87 they embarked on a two-month tour with their father that included concerts in Poland, Switzerland, France, Holland, Germany and England.

With the steamy blend of Donald's blistering lead guitar and husky vocals, Ron's shimmering second lead and invaluable rhythm lines, the funk-drenched grooves of Kenneth and Ralph, and a portfolio of original material, The Kinsey Report have created a dynamic blues concept for the 1990s.

Yet The Kinsey Report remain true to the solid blues heritage of their family and their beginnings on the tough Gary scene. "Our roots are the blues," maintains Donald. "It would be hard for us to get too far away from that. Everything we do has got a blues foundation. We can't get around that. It's us.''