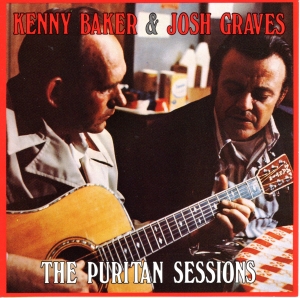 
Original Liner Notes (slightly edited):
Either by choice or necessity, first-generation bluegrass musicians usually reveal only a small portion of their talents. Until 1972, Kenny Baker and Josh Graves were certainly no exceptions.

During his three tenures with Bill Monroe and the Blue Grass Boys, Kenny personified everything that bluegrass fiddling should be: smooth, exciting, tasteful and inventive. Although known to play numerous instruments, Josh was primarily known as Lester Flatt and Earl Scruggs' Dobro player.

So when Kenny and Josh's first Puritan album Something Different was released in July 1972, listeners naturally expected a solid bluegrass set by two of the music's most distinctive stylists. Instead, they heard something far more intimate and introspective.
Abandoning the conventional structures of bluegrass, they created an acoustic, natural sound that reflected a considerably different side of their musical personalities. The album also revealed their indebtedness to traditional black musicians.

For Josh, The Puritan session provided a rare opportunity to publicly perform the music he privately prefers-the blues. This came as no surprise to most of his fans; his best recordings were filled with bluesy licks. But never before had he been able to sing in his own expressive natural voice. Freed from a bluegrass context, he emerged as a first-rate blues interpreter.

For Kenny, the session marked a return to the instrument he always considered his first love: the guitar. If few people even knew he played guitar, fewer still knew how well he played it. His four-fingered picking pattern was unlike any other heard before-a cascade of notes gently rolling over an open-G tuning. As a flat picker, his abilities matched the skills of the best acoustic country guitarists.

Bill Vernon, one of bluegrass' most perceptive writers and critics, called Kenny's artistry the best-kept secret since the Manhattan Project. "In both his finger picking and his flat picking, Kenny's guitar style is the perfect blend of substance and sensitivity", he wrote in 1973. "That he could have kept so formidable a talent hidden is not inconsistent with the man himself. In many ways a private person, Kenny speaks as judiciously as he plays his music, often invoking the lively sense of humor and incisive wisdom that are directly analogous to his approach to music."

Kenny's distinctive finger-picking style can be traced to Ernest Johnson, a blind, black guitarist who sold peanuts in Jenkins, Kentucky during the 1930s. Kenny and his older brother Carl were fascinated by the delicate, sprightly tunes that flowed from the aged musician's fingers. Before long, Carl began taking lessons from Johnson. After every session, Carl returned home to teach his younger brother what he learned.

Johnson presumably died decades ago; Carl was killed in World War II. At the time of the Puritan sessions, Kenny was probably the only guitarist able to recreate the older musician's style.

Kenny originally took up flat picking to back up other musicians, but his playing evolved over the years He transposed many ideas from another instrument he often played-the mandolin. Like many other country musicians of his era, he was also deeply affected by the early recordings of the great jazz guitarist Django Reinhardt.

When initially approached about recording an album of guitar instrumentals, Kenny seemed hesitant. After all, he hadn't played the instrument in more than twenty-five years. Borrowing a friend's Martin D-35, he quickly recalled many of Johnson's pieces and even created an arrangement of his fiddle tune "High Country".

However, he remained reluctant about recording as a solo guitarist. As the date for the session drew near, Kenny asked Josh Graves to accompany him. Josh, who had just left Lester Flatt's Nashville Grass, readily accepted the invitation.

In the studio, Kenny and Josh proved to be a natural team, and the tapes captured much of their mutual warmth and respect. With support from rhythm guitarist Bob Martin and multi-instrumentalist Roger Bellow on bass, they recorded twelve tracks in a quick, two and a half hour session.

When Something Different was released, surprised bluegrass reviewers hailed it as one of the year's outstanding albums. Even master guitarist Doc Watson called it one of his favorite records. The encouraging response led to the recording of a follow-up album, Bucktime!, in January 1973.

Over the next three years Kenny resisted numerous offers to perform with Josh, by then working with the Earl Scruggs Revue. But thoughts about setting up a permanent, working partnership with Josh were never far from his mind. He even bought a handmade A. LoPrinzi guitar, anticipating a time when he would leave the Blue Grass Boys for good.

But when they finally did team up in early 1985, Kenny's ability to play the guitar was all but destroyed. A serious knife accident in 1977 resulted in severe nerve damage to his left hand. Months of physical therapy and continuous practice restored his dexterity on the fiddle, but he remained unable to fret a guitar without discomfort.

Josh and Kenny's music was imaginative, exciting and for many, there was true magic in their partnership and these twenty-four tracks, recorded nearly two decades ago for an obscure, adventurous label.