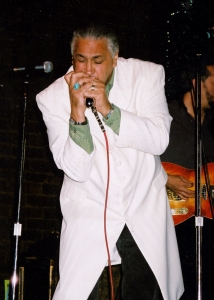 Ranked as one of the "Top Nine Unsigned Bands in the World" - International Blues Challenge, Memphis, TN

One of the Top Harmonica Players in the World

"Some People Think the Blues Are About Being Sad, For Those of Us Who Know, There's An Understanding - Blues Is About Having Fun" – Ken Rhyne

From the juke joints and taverns in Memphis, New Orleans and the Delta Blues of Mississippi, to the night clubs and casinos throughout the US and Canada, Ken Rhyne emerged as one of the most accomplished Blues/Blues Rock/Southern Rock ‘n Roll artists of our time. His dedication to musical perfection is something he is well known for, unsurpassed by most and heard in every recording and live show. He is a multi-talented Blues/Blues Rock singer/songwriter and one of the top harmonica players in the world.

Caught You White Handed, the title song on Ken Rhynes' first album was featured on the “Skin Tight Blues” compilation from Sweetgrass Records, hit #1 on the Aboriginal Charts in Canada and was nominated for a prestigious Native American Music Award

Rhyne has written and performed commercials for adult beverages and casinos, performed at the New Orleans Jazz Festival and other major arenas around the US and Canada. Musically, he has shared the stage with such well known, internationally recognized artists as George Thorogood and The Destroyers, Elvin Bishop, Mavis Staples, Greg Allman, Delbert McClinton, The Nighthawks, Jimmy Thackery, Kenny Neal, Sean Costello, The Neville Brothers, Doug Kershaw and many others.

As an educator Ken Rhyne pun-fully turns the table on color coded slurs while at the same time uniting people of spirit through his high energy harmonica and well crooned tunes. He is an ambassador to the legacy of great Blues artists, an embodiment of a people, and an era of suffering that washed up on the shores of this continent some 500 years ago. Through his design, music and civic involvement, Ken Rhyne serves to represent an even broader segment of oppression in his delivery of Blues / Blistering Blues and Southern Blues Rock, the way “Our Fore Fathers of Blues” intended it to be.

Originally from High Point, NC, Ken Rhyne is a member of the Iroquois band of Tuscarora Indians. He is a nationally-recognized, award-winning designer with a talent for respectfully incorporating tribal culture into museums, cultural centers and other types of facilities around the world and has served as an advocate for Native American issues throughout his life. He is an award-nominated singer/songwriter, one of the top harmonica players in the world and was ranked as one of the top nine unsigned bands in the world at the International Blues Challenge, Memphis, TN. Ken Rhyne is also a member of the Pfeiffer University Baseball Hall of Fame and was a minor league player for the Washington Senators and Texas Rangers

He and his family currently reside in Atlanta, GA, where Rhyne is a Principal with Urban Design Group, an internationally recognized design firm where Ken is a noted interior designer and pivotal part of the firm’s leadership team. His national portfolio includes the Museum of the Seven Feathers in South Carolina, Weedon Island Preserve Educational Center in Florida, Red Hawk Casino in California, the award-winning Cultural Resources Center for the Smithsonian Institution’s National Museum of the American Indian, the Kampen Eagle Wing Center in Indiana among others. Urban Design Group offers architectural and interior design, planning and urban design services to its worldwide clientele from studios in Atlanta, Georgia, and Dallas, Texas. www.UrbanDesignGroup.com