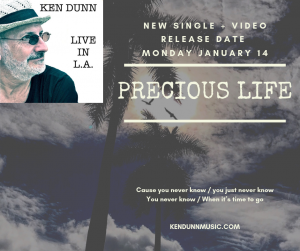 Ken Dunn is a modern day travelling troubadour, giving social and environmental issues a voice in song, while reminding us to keep our loved ones and peace at the forefront of this precious life.
Ken was born in Windsor, Ontario and now resides on the Sunshine Coast in Gibsons, BC.

How delicate and precious a gift is this life we share.!?!

"PRECIOUS LIFE" (track 5 - 4:06 )* was written as a token of gratitude to my parents, at a time when their lives appeared to be quickly slipping away.

Originally recorded on my 1996 album of the same name, Precious Life has once again found its way into my live performance repertoire, and ultimately onto this recording, “Live in L.A.” over 20 years later.

I hope you enjoy this version, and it serves as a welcome reminder to treasure the ones you love each day! Tell the ones that you love, that you love them, NOW!
*Sirens courtesy of LAPD*

"Live In L.A." came together almost by accident. After attending Far-West in Los Angeles, I got a gig at Kulak’s Woodshed in North Hollywood. An impromptu partnership with LA Family Housing resulted in a benefit concert for those struggling with homelessness in the greater Los Angeles area. With the support of Sandy Jacobson at Backstage: Los Angeles on LA Talk Radio, the stage was set.

There, on the edge of Laurel Canyon, with the taste of smoke still drifting in from the remnants of the Malibu fire, Paul Kulak and his crew did a great job recording this live concert before an attentive and enthusiastic audience at his fabled establishment.

My wish is that you enjoy the CD in the spirit that it was given and consider supporting LA Family Housing (www.lafh.org) and/or efforts to reduce homelessness in your own community.

1. Shifting Sand (5:00) Originally recorded on my 2016 album “The Great Unknown”. In this world of constant shifting sand, let us make peace with the hands of time.
2. Lifestream (4:22) From my 2014 EP “Sacred Water” with Anna Green. "I will call to you, like you call to me, as we paddle down life’s stream."
3. Tahlequah (5:41) In a heart wrenching display of grief, this mother orca, one of the few remaining in our local BC pod, carried the lifeless body of her child for two weeks before finally releasing her to the deep. Aho Mitakuye Oyasin! We are all one!
4. Heart of Mine (4:36) Originally recorded on my 1996 album “Precious Life”. I wrote this in San Francisco after meeting homeless musicians in Haight-Ashbury.
5. Precious Life (4:06) *Originally recorded on my 1996 album of the same name. Written for my parents in gratitude. Don’t waste another minute. Hug your loved one. It’s a precious life.
6. Fire, Wind, the Earth and Rain (4:25)Love will conquer hate, and light overcome darkness. Hope is on the way. Don’t be fooled, love still gonna rule!
7. Farewell to the Cages (3:59) Mother Earth we hardly knew you. Goodbye friend!
8. Don't Believe (3:38) Originally recorded at the Festival of Friends in Hamilton, Ontario in 1994 and released on my 1996 album “Precious Life”, this tune is an anthem for peace.
9. St. James Infirmary (4:13) I first heard Cab Calloway sing this traditional blues in a Betty Boop cartoon as a child! No kidding! Obviously made quite an impact. I recorded a version in 1996 on the “Precious Life” album.
10. Naked and Amazed (5:29) Previously recorded on 2014’s “Sacred Water” EP with Anna Green. A song for the Earth and its many diverse beings. Mother Earth, keep us safe from harm.
11. Wild Horse (4:56) Originally recorded on my 2000 album “Time and Space”. For all the wild horses out there, and the wild love within us all.
12. Saskatoon (4:19) Written in Saskatoon and originally recorded on 1994’s “Winds of Emotion”. I recorded this again for 2018’s “Wondrous Beauty”. I love you, I really do!

In support of “Live In L.A.” which is slated for album release worldwide via Trespass Music on Friday, February 1, Ken will be touring BC, including shows on Vancouver Island, and travel on to private showcases at Folk Alliance International in Montreal, perform at the 6th annual Harry Chapin Food Bank Benefit Concert in Florida, and make stops throughout Southwestern Ontario.

A veteran Canadian folk singer-songwriter, Ken has performed at hundreds of venues over the past 30 years, across Canada, the U.S., and Central America, sharing the bill with folk and roots icons as diverse as Jerry Jeff Walker, Willie P. Bennett, Valdy, Mike Beck, Roy Schneider, Pi Jacobs, and Garnet Rogers.

Ken’s passion for social and environmental justice is evident in the many benefit concerts he performs, supporting charities as diverse as the Harry Chapin Food Bank, Amnesty International, Playing For Change and LA Family Housing.

“Live In L.A.” the predecessor to his ninth album, which is already in the works, sees Ken continuing his journey in search of social and environmental justice for all, lending a voice in song as an instrument toward awareness and inspiration, while reminding all that our loved ones and peace are paramount to our existence in this world as we seek to live as one.

Wondrous Beauty
Folk Roots Radio with Jan Hall interview
http://folkrootsradio.com/ken-dunn-folk-roots-radio-interview/
Top Ten ‘Canadian’ Folk Albums/ #44 - Folk DJ-L Charts, September, 2017
NO DEPRESSION Review
“Ken Dunn must have that song catcher soul to have such tradition in his musical mind. This new ten track LP brings you back to earth and cleans out your ears with moments of “Wondrous Beauty” for sure. Dunn’s very John Prine-influenced performance also forays into the stylings of folk-legends like Tom Rush, Tom Paxton, David Ackles and John Hartford. A stew of wonderful notes stirred perfectly, it sneaks into your feet, heart, and soul."
http://nodepression.com/album-review/traditionally-rooted-potent-performances-fiery-fiddle-acoustics

Reviews from Belgium, The Netherlands, Sweden, Italy and France as well as more interviews and reviews from Jim Marino (24th Anniversary Special) and Jan Vanderhorst.
Sun Parlour Coffee House Sessions - selected to perform and record for a TV series in the Windsor/Essex area.