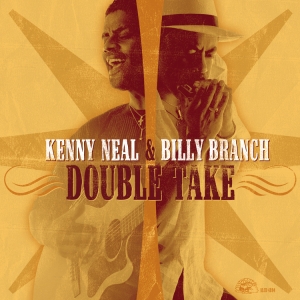 Take two critically acclaimed bluesmen, team them up in a recording studio, hit the ‘Record’ button, and listen as the magic begins to flow. Case in point: Kenny Neal and Billy Branch’s new Alligator album, Double Take. Kenny Neal is a critically acclaimed triple-threat bluesman, whose guitar and harmonica prowess are matched note for note by his soulful singing and passionate performances. Billy Branch is among the best blues harmonica players in the world. He is a gruff and potent vocalist, a groundbreaking solo artist, a valued session player and leader of the venerable Sons Of Blues. Neal and Branch got together in a studio in France in 1998 and recorded a magnificent acoustic album (released only in Europe), paying tribute to past musicians and laying the path for a bright and uncompromising future for the blues. Now that album—Double Take—is finally seeing the light of day in the United States. From St. Louis Jimmy’s “Goin’ Down Slow” to the Little Walter gems “My Babe” (written by Willie Dixon) and “I Just Keep Loving Her” to Sonny Boy Williamson’s “Don’t Start Me Talking” to the originals “Billy and Kenny’s Stomp” and “Northern Man Blues,” the two trade vocals in a relaxed and warm meeting of styles, riffs, whoops and hollers. Blending deep blues tradition with a contemporary, pulsating edge, Neal and Branch deliver a foot-stomping and spirited look into the blues through the eyes of two remarkable musicians who will continue to be at the forefront of the blues world for many years to come.

KENNY NEAL
Kenny Neal stands tall among the younger generation of blues players. His trademark brand of blues, featuring a combination of Louisiana swamp blues, funky rhythms and soul-deep vocals, powered by his slashing guitar playing and—on his solo albums—loping harmonica, puts him at the forefront of contemporary blues players.

Born October 14, 1957 into a deeply rooted multi-generational blues family from Baton Rouge, Louisiana, Kenny’s been playing the blues since he was a small child. He first learned the blues from his father, harpist Raful Neal, and family friends like Buddy Guy, Lazy Lester and Slim Harpo. It was Slim who gave Kenny his first harp, trying to pacify the crying three-year-old boy. It worked. Kenny mastered harmonica, and quickly moved on to bass, trumpet, piano and guitar. He first performed at age six, playing piano at one of his father's gigs. By the time he was 13, he officially joined his father's band as a bass player, before being recruited as Buddy Guy's bassist at 17. Following Buddy's advice to concentrate on his guitar playing, Kenny relocated to Toronto, and—along with his brothers Raful Jr., Noel, Larry and Ronnie—formed the Neal Brothers Band, regularly backing visiting blues stars. Later he fronted Canada's Downchild Blues band before returning to Baton Rouge to begin his solo career.

Teaming with producer/bassist/horn arranger Bob Greenlee in 1987, Kenny cut a series of albums featuring not only his laid-back, Baton Rouge blues, but also funky contemporary gems with a taste of rock and R&B. Kenny joined Alligator in 1988, and his albums became blues hits, with the critics hailing him as one of the best of the younger blues generation. Down Beat declared, “Neal has a contemporary style unto himself, his phrases flare with pointed feeling and fervid imagination, his singing is randy and exuberant.”

With his popularity growing, Neal expanded his horizons beyond the blues world. In 1991, he starred in a Broadway musical, "Mule Bone," with music by Taj Mahal, and won a Theatre World Award for his performance. In 1993, he toured Africa for the U.S. government, performing in seven countries. During the late 1990s and early 2000s, Neal recorded and released three albums for Telarc. He continues to tour the country and bring new fans not only to his music but also to the blues in all shades and hues.

He's played with major blues stars from B.B. King to Buddy Guy, and has emerged as one of the few names on the short list of current blues greats. His music is deeply rooted in the Louisiana swamp blues tradition, but burns with a contemporary fire. "One of a mere handful of truly inventive young contemporary guitarists," announced the Chicago Tribune, "Neal has something fresh to say and the chops with which to say it."

BILLY BRANCH
Six years Neal’s senior, Billy Branch shares the same youthful exuberance and desire to spread the blues to a much larger audience as his partner on Double Take. Born in Chicago in 1951 and raised in Los Angeles, Branch first picked up a harmonica at age 10 and began picking out tunes on his own. He returned to Chicago in 1969 and enrolled at the University of Illinois, where he studied political science. When not attending classes, Branch immersed himself into the local blues scene, spending time at many of the famous blues haunts like Theresa’s and the Checkerboard Lounge. Branch learned the finer points of harmonica directly from blues legends like Big Walter Horton, James Cotton, Junior Wells and Carey Bell. His sound is powerful, melodic, jazzy and contemporary, solidly swinging yet fully under control. His famous teachers made it clear for years that Branch was the heir apparent to the Chicago blues harmonica throne.

After beating the harmonica master Little Mac Simmons during a harmonica battle royal in 1975 at Chicago’s Green Bunny Club, Branch began working regularly in blues clubs all over the city. He recorded his first track for an anthology on Barrelhouse Records in 1975. Carey Bell brought Branch to the attention of blues legend Willie Dixon, who then invited Branch to join his Chicago Blues All-Stars. Branch stayed with Dixon for six years, soaking up the lessons offered up by Dixon—both musical and professional. He took his blues education and formed The Sons Of Blues in the late 1970s, and his reputation as one of Chicago’s best new generation harmonica players grew swiftly. The Sons Of Blues toured Europe, honing their chops and tightening their sound. When they returned to the States, they recorded three songs in 1977 for Alligator Records’ Grammy-nominated Living Chicago Blues series, and then for the label’s New Bluebloods anthology, bringing them their largest national exposure.

In 1990 Branch, along with Junior Wells, James Cotton and Carey Bell, recorded the W.C. Handy Award-winning album, Harp Attack! for Alligator. He’s recorded several solo albums and has appeared on over 50 other releases as a session player with numerous blues stars, including Koko Taylor, Lonnie Brooks, Lou Rawls, Son Seals, Willie Dixon and Johnny Winter. Branch received the Living Blues Critics Award in 1993 for “Most Outstanding Blues Musician” in the harmonica category. In addition to his recordings, Branch is also an educator, and his Blues In The Schools program has earned him praise both inside and outside of the music world. Branch shares his knowledge of the music through his Blues In The Schools program in Chicago and other cities around the country, where he teaches blues history as well as providing instrumental instruction to children. In 1996, members of his classes, with Branch at the helm, opened up the main stage at the Chicago Blues Festival, which was broadcast nationwide on National Public Radio.