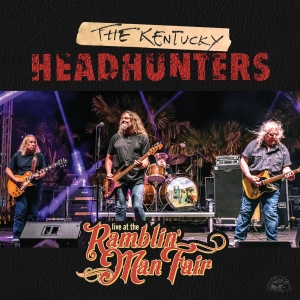 "The Kentucky Headhunters," says founding member, guitarist/vocalist Richard Young, "are and always will be in love with playing live. It's our lifeblood." The Grammy-winning band - declared "the great American rock 'n' roll band" by Billboard - is never more spontaneous and unpredictable as when they are performing live on stage. "We threw away the set list 20 years ago," says Young, whose brother Fred plays drums, cousin Greg Martin plays guitar and longtime friend Doug Phelps sings and plays bass. Although the Southern rock, blues and country band has been recording and touring together for over 30 years (and making music together for over 50 years), they had never, until 2016, performed overseas. That year, Richard - a notoriously uneasy flier - let his son John Fred (drummer for rising star rock group Black Stone Cherry) talk him into bringing The Kentucky Headhunters to Europe. A tour of Sweden and the United Kingdom was booked, and the band was on its way to earning a whole new audience for their raucous and rowdy music.

The Kentucky Headhunters' new Alligator Records album, Live At The Ramblin' Man Fair, was recorded at The Ramblin' Man Fair in Maidstone, UK, a highlight of the tour. In front of 25,000 screaming fans, The Kentucky Headhunters rip through ten smoking hot tracks from their first-ever UK performance. The results are staggering. Combining old-school blues and blistering Southern rock with country overtones and a rural sensibility, The Kentucky Headhunters cross borders and genres with ease, as the elated UK audience roars its collective approval throughout the concert. Mixing six high-energy originals, searing blues rockers and a rollicking version of The Beatles' Don't Let Me Down (with Black Stone Cherry), Live At The Ramblin' Man Fair captures The Kentucky Headhunters at the absolute height of their power. Closing out the album are three recently discovered bonus studio tracks from the legendary Meet Me In Bluesland sessions featuring late blues piano icon Johnnie Johnson (known for his seminal piano work driving Chuck Berry's most famous songs).

With no other country, rock or blues band quite like them, it's no surprise that the history of The Kentucky Headhunters is as deeply rooted as their music. Growing up on a 1300-acre family farm in Edmonton, Kentucky, the Young brothers (Richard and Fred), cousins Greg Martin and Anthony Kenney heard plenty of raucous R&B and deep, soulful blues courtesy of Fred and Richard’s mother, who listened to powerhouse radio station WLAC late at night. "She was a real hip white girl," Richard says. "She was a huge influence on us." Their father loved big band jazz, Benny Goodman, Tommy Dorsey and Sarah Vaughan. "Music in our home was a mixture, unlike what most farm kids heard." Part of their musical upbringing included their friendship with three African-American families who lived and worked on nearby farms. The boys heard gospel and blues, both sung by their neighbors in the fields and blasting out of their radios. They were reared on Howlin' Wolf and Muddy Waters (the name Headhunters was a nickname given to Waters and Jimmy Rogers at the start of their careers, when they came into a club ready to take on all comers). "All of these things taught us the blues," says Richard.

The Kentucky Headhunters began their professional journey in 1968 when the Young brothers and their cousins Martin and Kenney formed the Southern blues-rock band Itchy Brother. The band morphed into The Kentucky Headhunters in 1986. Their first album, 1989's Pickin’ On Nashville, was released by Mercury Records and surprised the world, becoming a bona fide hit and selling over two million copies. The album won a Grammy Award, three Country Music Awards, an American Music Award and an Academy Of Country Music Award. It spawned four consecutive Top 40 Country hits and established them as a musical force to be reckoned with. By 1993 they had befriended Chuck Berry’s famous pianist Johnnie Johnson and recorded That'll Work, surprising and delighting their country-loving audience with their deep blues playing. Befriending Johnson and recording with him was a dream come true for the band. According to Fred, "We were fortunate to know him. It was a good marriage." Richard adds, "Anyone who ever played with him became a better player."

Constant touring has kept the band busy and each new release has kept them in high demand. 2015's Alligator CD, Meet Me In Bluesland (recorded in 2003 with Johnnie Johnson) brought the band to the attention of a whole new audience. No Depression called the album, "A raucous, rockin' romp that'll put a big ole grin on your face. Johnson is showcased here at the height of his powers, pounding out licks like a wrecking ball." The Wall Street Journal called it, "a collection of rollicking, loose-limbed songs rooted in the blues and vintage-style rock 'n' roll."

2016's On Safari (Plowboy Records), led to the band's first European tour and in turn to the album Live At The Ramblin' Man Fair, their second career live album. "Truth is," says Richard, "we didn’t even know we were being recorded. I found out later the festival folks recorded our whole set. After hearing it, I knew it captured us exactly as we really are, and I knew we had to release it." With the new album and another UK/European tour in the works, The Kentucky Headhunters are excited to visit their new friends and fans across the ocean, as well as hitting the highway across the U.S. and Canada. Whether they're turning Southern rock fans on to blues or turning blues fans on to Southern rock, The Kentucky Headhunters are simply thrilled to be enriching the lives of so many music fans for so many years. According to Richard, "When the four of us get together, it's a powerful thing. It makes people happy. It's really good music."
12
What's This
Advertisement