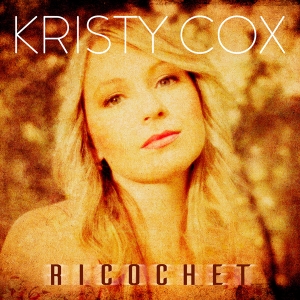 Ricochet, released in late 2017, is the first single from the newly released album by the same title from Kristy Cox, and has just hit the top spot on the Bluegrass Today’s Top 20 Songs and has stayed there for two weeks. Making this 6 weeks total in the Top 3.

From a young age, Kristy Cox captured plenty of attention with her distinct singing style and positive nature, resulting in opportunities to open shows for major acts and making regular festival and television appearances across Australia, Europe, and the US. In 2015 she was selected as an official showcase artist for the International Bluegrass Music Association (IBMA) where she began drawing the attention of music industry professionals. With a string of #1 hits on radio and country music television in Australia, Kristy has also made headway on the US bluegrass charts in recent years. Her last two projects, produced by Grammy® winner Jerry Salley, were very well received, with the latest making strong appearances throughout 2016 on multiple album and songs charts. 2017 kicked into high gear when she won "Bluegrass Recording of the Year" from the Country Music Association of Australia.

For her new project on Mountain Fever, Kristy has once
again teamed up with producer and songwriter Jerry
Salley. Of the Cox/Salley music partnership, David
Morris of Bluegrass Today writes, "This is one of those
special pairings that cries out to be preserved."