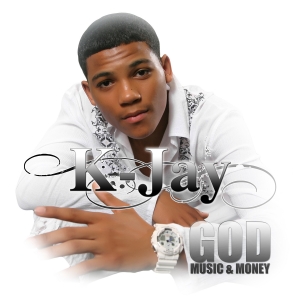 Korey Dean Jr. also known as “K-Jay" was born in Dayton Ohio in 1994. At age one, his life was miraculously spared when he survived a tragic car accident. K-JAY was cut out of the car with the Jaws of Life, but by the grace of God did not get a scratch or suffer any injuries from the accident. Growing up under the guidance and influence of a single parent father, K-Jay developed maturity beyond his years.

As a seasoned artist, KJ began his ministry at 9 years old under the tutelage of his father XROSS a nationally well-known Christian hip hop artists. K-Jay debuted 2003 with a packed house at club 3 Degrees, a premiere Christian nightclub in the heart of downtown Minneapolis and electrified the crowd with is bold articulation of the good news and professional stage presence. Independently releasing his debut project entitled “What We Like” in 2005; KJ has sold more than 5k units out of the trunk while traveling the country in the custom designed “Holy Hip Hop tour Van”.

K-Jay is an exceptional talent! He is a master his craft as a prolific Christian rap artist. He appeals to a diverse audience and has a vast array of hip hop styles ranging from urban to pop and rock. K-Jay’s humility and hard work ethic has brought him success in music industry and afforded him opportunities to reach thousands of youth worldwide with the good news of Jesus Christ.

K-Jay is a great motivational speaker and a wise young man. He is a role model and an honor roll student in his local high School and serves at his local church and community. He is a bonifeid leader and is laying the foundation for teens that it's ok to express your faith, live for God, and still be cool!

At age 16, KJ has just completed his New album entitled "GOD, MUSIC & MONEY" and is set to release in 2011. The new album is loaded with hits like “Reload’,Wave ya Hands, Favor Ain't Fair, Good Girl & 'Good Guy".

GOD, MUSIC & MONEY is sure to establish KJ as one of the top christian hip hop artist in the country. The album in is cutting edge with a strong mainstream crossover appeal,and a solid message that God is first, before evrything. "Seek the Kingdom of God above all else, and live righteously, and he will give you everything you need'
Matt. 6:33

The future of young K-Jay is bright and promising. This young hip hopper promises to lead a generation to fun, clean, Hip Hop with a positive message that empowers teens across the globe!