K-G and The Band 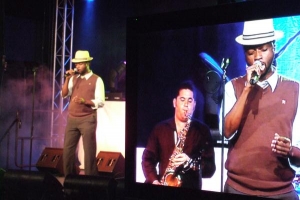 A BRIEF HISTORY OF K-G AND THE BAND

K-G and The Band was formed under the leadership of the Lead Vocalist K-G. K-G Originally from East Africa, a US immigrant formed the band under the vision of diversity in Music and Culture; hence the band's sound is so unique that it has its own brand name. They call it "Afro-Urban Music". The band comprises of members from the Caribbean, Europe and Latin America. All this builds a unique sound that is only compared to a combined feel of SADE, Bob Marley, Seal, Dave Mathew's band and Wyclef Jean all in one. Currently doing major shows locally and nationwide.

"It is an authentic sound"-Calabash Music. com

"You got to see them live to believe it" -Michael Simiyu, Mtaa FM "

"His energy, combined with the band's, really did have me shakin' my hips"-Alicia Lyman, Orlando CityBeat

"you get a little Afrobeat and a little soul"- Jason Ferguson and Bao Le-Huu,Orlando weekly