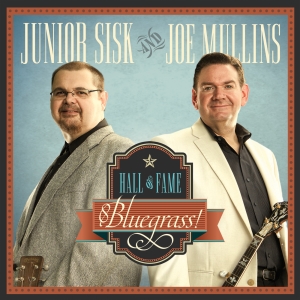 Though Joe Mullins hails from Southwest Ohio and Junior Sisk grew up hundreds of miles away in Southwest Virginia, their mutual love of classic bluegrass music and its creators connects them like long lost brothers. Joe and Junior were born in the mid-1960s, when bluegrass as we know it was less than two decades old and its pioneering artists were barely middle aged. Now, nearly fifty years later, Joe and Junior have emerged as leaders of their own generation. So it is only fitting that these two men should join together to honor the mentors whose work and sacrifices paved the way for their own rise to the top. They do just that, and more, with Hall Of Fame Bluegrass! – a tribute to members of the IBMA Hall of Fame.

Mullins is the son of Paul “Moon” Mullins, a renowned fiddle player and radio DJ from Ohio. During the late 60s, the Mullins home was a frequent stopover for many bluegrass pioneers, including Red Smiley, Jimmy Martin, Ralph Stanley and Bobby Osborne. Joe’s up-close encounters with these legends ignited his interest in playing music, and his dad’s broadcasting expertise inspired Joe to develop his communication and promotions skills. Today, in addition to being a first-rate singer, banjo picker, emcee, and bandleader, he owns and manages several radio stations. He performed with his dad for a dozen years in the Traditional Grass and was a member of the supergroup Longview before founding the Radio Ramblers. In 2012, Joe Mullins & The Radio Ramblers were named IBMA Emerging Artist of the Year, and in 2013 they made their debut on the Grand Ole Opry.

Sisk grew up immersed in the bluegrass culture around rural Ferrum, Virginia. His dad, Harry Sisk, was a songwriter who drew inspiration from his musical hero, Carter Stanley. Junior followed in his dad’s footsteps, and between them they have contributed dozens of songs to the contemporary bluegrass repertoire. Junior was the lead singer and guitar player for Wyatt Rice & Santa Cruz and for BlueRidge before stepping into his leading role with Junior Sisk & Ramblers Choice. The band’s third Rebel release, The Heart of a Song, was the IBMA Album of the Year in 2012, and its opening track, “A Far Cry from Lester and Earl,” was named Song of the Year.

The idea for Hall Of Fame Bluegrass! was hatched after Joe joined Junior for a powerful duet on the Stanley Brothers classic, “Lover’s Quarrel,” on the latest Ramblers Choice CD, The Story Of The Day That I Died. Excited by their shared passion, the two began selecting songs and assembled a stellar band of like-minded pickers, all of whom are IBMA award winners themselves.

Hall Of Fame Bluegrass! is more than just a lovingly crafted tribute to the past masters of bluegrass. It is a stunning set of performances by two of today’s brightest stars, joined by an award-winning cast, who are destined to one day take their own places in the Hall of Fame.
23
What's This
Advertisement