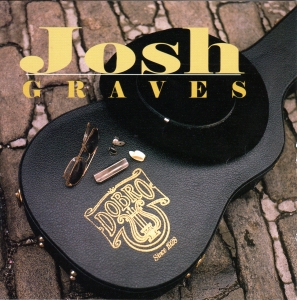 In the world of acoustic steel guitar, Josh Graves is quite simply "the man". He is basically responsible for all the resophonic guitar players in the bluegrass / country field of music that are now enjoying such prominence. His sound captured my heart and imagination back in the early 1950's when he was playing with Wilma Lee and Stoney Cooper, and then completely blew my mind when he joined Flatt and Scruggs in 1955. His influence can be heard in the playing of every subsequent resophonic player today.

Josh did for the Dobro guitar what Earl Scruggs did for the five-string banjo and Bill Monroe did for the mandolin... which was to change the role of an instrument for all time. That, of course, is about as big an influence that one could hope for in a career. The resophonic guitar, or Dobro as it was called in the days of being basically the only brand name of a mechanically amplified guitar, was used more in the Hawaiian style of playing before, but no longer was the resophonic used just to sweeten the lyrics of a country song, it was now bursting with energy, pushing the music into overdrive, right along side the banjos and fiddles of what was becoming known as "bluegrass music."

In this recording, you will hear the great back-up and solos in the tradition of the old Flatt and Scruggs band, the three-finger rolls that Josh brought to the instrument, as well as some of the old "crying" steel guitar sounds that the Dobro became known for in the 1940's. Josh started it all and is still the champ.