John D'Amato - Blood On The Strings 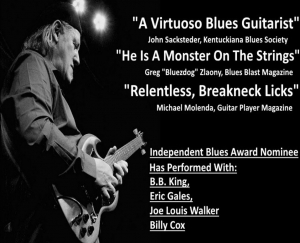 Many people claim to have the right to sing the blues. That entitlement may come from their birthplace, their heritage, or their circumstances. John D’Amato definitely has the right to sing the blues because he was literally born blue. John was born with a life threatening condition known as Coarctation of the Aorta, where the lack of oxygen through the body actually caused him to turn blue. Back then there was no way to surgically correct this condition, so he had to be monitored closely and tested frequently. His childhood seemed like an endless routine of doctor visits and hospital stays until he reached the age of nine when an experimental procedure corrected his disorder.

During that time the two things that helped him through those rough times were God and his older sisters’ guitar. He would pick it up, on his darkest days and just play. The more he did, the better he felt. Eventually he got his own guitar and started writing down how he felt at the time, and putting it to music. Amongst the great blues songwriters, childhood misadventures can be the ultimate inspiration for the blues. By the age of 14, he was then, by todays’ standards, a child prodigy. He was the first guitarist ever accepted to the prestigious New Haven Educational Center for the Arts. John got his start and found local success at that early age playing for various regional bands around New Haven and Connecticut. Over the years, he played for various artists and in different genres; yet he always came back to the Blues. John has a sense of where he is going creatively and what blues music means to him. He is focused on making an impact with his songs and what they bring to the lives of those that encounter them - especially live.

John D’Amato is one of those rare guitarists that have managed to combine amazing chops with incredible feel. By channeling all of his influences (T Bone Walker, Buddy Guy, John’s good friend Joe Louis Walker, B. B. King, Jimi Hendrix, Jeff Beck, Roy Buchanan, and Howlin’ Wolf, John has managed to create his own brand of music that fuses the passion and feel of blues with his unstoppable energy and intensity. His ability to bring a song to the next level with his fervent solos along with his unique soulful vocal style make John D'Amato one of the new generation of blues men.

John D’Amato has been making waves since the turn of this century. In 2009 John was selected as one of “Guitar Player Magazine’s Editors Top 8”. John performed with B.B. King in 2010 in Nashville and Billy Cox and Eric Gales in that same year. Joe Louis Walker was so impressed with John he asked him to perform on his Award Winning 2012 release “Hellfire”.

The successful reception of John’s debut CD, “Ain’t No Big Deal”, sparked a slew of performances with many blues notables such as: B. B. King, Billy Cox, Eric Gales and Joe Louis Walker. Joe Louis Walker was so impressed with John’s ability, he asked John to make a guest appearance on his first Alligator Records Release “Hellfire”. John spent the next year writing songs and raising money through a “Kickstarter” campaign. The culmination of his efforts produced his 2nd release “Born Blue: The Sun Sessions”.
"Born Blue" earned John a nomination for an "Independent Blues Award" for the "Best Song" in Blues/Rock Category.
In addition to comments about his guiar playing such as:
"A blues guitar virtuoso", John Sacksteder, Kentuckiana Blues Society.
"He is a monster on the strings", Greg Bluesdog Szalony, "Blues Blast Magazine".

John's new CD "Blood On The Strings, not only features John's great songwriting, virtuoso guitar playing and soulfull vocals, it will also feature John's wife, Lauren D'Amato. Lauren is an acomplished vocalist that has performed at New Yorks own Madison Square Garden in addition to being billed with such major acts as Lionel Ritchie. The new CD features Lauren handling the lead vocals on 2 songs and 2 duets with John.

No one else on the scene, plays with as much passion and reverence for those who came before him, but D’Amato is really just getting started. He will certainly in turn inspire many who come after him, as he continues to conjure up and refine his unique sound with every show. His goal is to hone his craft and grow his legacy to be one of the truly great guitar slingers of all time.
5
What's This
Advertisement