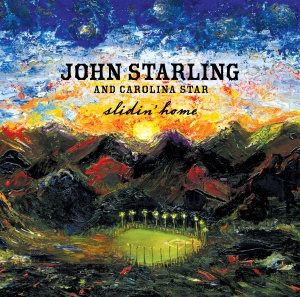 John Starling, one of the great singers of contemporary Bluegrass and acoustic music, is in a perfect setting for his soulful voice on these tracks. Starling, a founding member of one of the all-time great acoustic bands, the Seldom Scene, was away from actively performing for many years while he pursued his career as a surgeon in the medical field. It’s great to have him back, especially in a band that is very reminiscent of the Seldom Scene—as well it should be, considering that two members—Mike Auldridge and Tom Gray—were also important & founding members of that group. Unlike the Scene, it’s a group without a banjo, but additional members Jimmy Gaudreau (mandolin) and Rickie Simpkins (fiddle) add beautifully to a tasteful and wonderfully musical treatment of some fine material. Every song is powerful in its own way, starting with Starling’s take on the old Jimmie Rodgers favorite, "Waitin’ For a Train." John is joined by longtime friend of the Scene, Emmylou Harris, in a poignant treatment of Gram Parsons’ "In My Hour of Darkness," and his achingly beautiful vocal on the classic Leon Payne song "They’ll Never Take Her Love From Me" is to me is well worth a listen. Another great song is Gillian Welch’s "Riverboat Song", and "Those Two Blue Eyes", "Willin’", "Cold Hard Business" and Sarah Pirkle’s "Prayer For My Friends" are all impressive. A gem of an album!
4
What's This
Advertisement