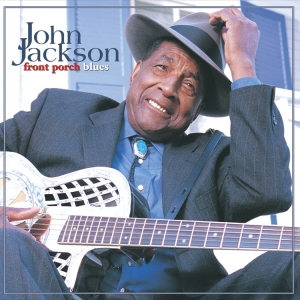 Virginia songster John Jackson, whose gentle, acoustic guitar picking and warm, rich baritone voice won him a National Heritage Fellowship, was one of the last remaining first-generation country bluesmen. His music--East Coast Piedmont blues, ragtime, folk, old-time hillbilly songs and ballads--transcends race, class and intellectual backgrounds as if barriers did not exist. Without a doubt, Jackson, an absolute favorite at blues festivals all over the world, is one of the country's preeminent singer-guitarists, a genuine national treasure. Jackson's Alligator Records debut, Front Porch Blues is further proof, as his guitar's percolating strings glide over the melody and his foot taps become drum beats behind his husky and soulful voice. "John Jackson is a highly talented musician who has enriched an already rich musical heritage with his taste and inventiveness," raved Sing Out.

Front Porch Blues finds Jackson picking and singing old songs and new, many of which he first heard and played as a child. From the easy going “Railroad Bill” and “Midnight Hour Blues” to the gentle instrumental “Rappahanock Blues” to the deeply spiritual “Death Don't Have No Mercy” to the ragtime-flavored “The Devil Wore A Hickory Shoe,” John Jackson's deceptively simple singing and guitar playing encompass a wealth of complexities. The album's three original songs would be as much at home in the 1920s and 1930s as they are today. Front Porch Blues is warm, intimate music crafted by a blues master.

Born in Rappahanock County, Virginia on February 25, 1924, John Jackson was the seventh son of 14 children. His parents were farmers as well as musicians who played parties on weekends and holidays. John first played around with his father's guitar at age four, and by eight he taught himself enough to accompany his parents at parties. His parents bought a second-hand Victrola when John was six, and John soaked up the sounds from the blues and country 78s by Blind Lemon Jefferson, Blind Blake, Blind Boy Fuller, Uncle Dave Macon and Jimmie Rodgers. When he was ten, John met a chain gang convict named Happy, who was working near the Jackson's home. Happy taught John open tuning and slide guitar techniques all the while encouraging the young musician. Before he could learn to read or write, John had to drop out of school to work on the farm. He continued playing parties with his parents during the 1930s and 1940s but quit playing music a short time later. He felt music encouraged violent behavior, and he didn't want any part of it.

John moved to Fairfax, Virginia in 1950 with his wife, Cora, and children to work on a dairy farm. He ended up spending most of his time working around the farmer's home as a cook, butler, chauffeur, and general caretaker until the early 1960s. A friend of John's, in need of some quick cash, pawned John his guitar, and John quietly started playing again. At this point he became a gravedigger to support his family, occasionally pulling out his guitar for fun. One day, while John was playing guitar for some neighborhood kids, his mailman asked him for lessons. John agreed to meet him at the local gas station, where the mailman had a second job. While John played at the gas station, Chuck Perdue, the president of the Folklore Society of Greater Washington, pulled in for a fill-up. He heard John playing and knew that he stumbled onto a true original. Within weeks, John was playing at coffeehouses in the Washington D.C. area, where he gradually regained all his old musical powers.

In April of 1965, John recorded songs for his first record, Blues And Country Dance Songs From Virginia, for Arhoolie. He became an instant hit at blues festivals, easily winning a whole new generation of fans already singing the praises of Mississippi John Hurt, Skip James and other early bluesmen rediscovered at the time. Two more Arhoolie albums followed, as John's reputation continued to grow. Among his friends and admirers were Mississippi John Hurt, Mississippi Fred McDowell, B.B. King and Ricky Skaggs. Two albums for Rounder in the 1980s kept Jackson busy on the international tour circuit. Besides constant trips to Europe, Jackson played Asia, Africa, South America, India and all over the United States. The National Endowment for the Arts awarded John with their National Heritage Fellowship in 1986, giving official recognition to this vibrant living blues giant.

Over the years Jackson has befriended, in his words, "just about everybody that's a guitar picker." Eric Clapton, Bob Dylan, Bonnie Raitt, Arlo Guthrie, Pete Seeger, Luther Allison, Junior Wells and Son House have all shared stages and swapped songs with Jackson. Carl Sandburg and Alex Haley, even Fred Rogers (Mr. Rogers Neighborhood) counted themselves among Jackson's close friends. With a strong desire to stay in Virginia and not take to the road, John Jackson's accomplishments are truly astounding. He went from playing on his front porch to playing at President Jimmy Carter's Labor Day Picnic at the White House, Carnegie Hall, the Royal Albert Hall, to points all over the world.