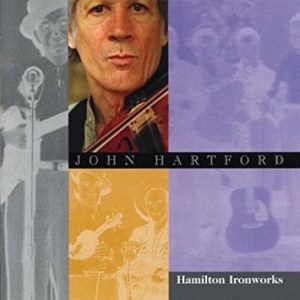 
Hamilton Ironworks, the last studio recording made by fiddler John Hartford before his untimely death in 2001, is a collection of old-time fiddle pieces in the tradition of Gene Goforth, Ed Haley, and many others. Hartford interprets nearly two dozen traditional melodies. There are few concessions given to modernity, and, while bringing his own distinct voice to the tunes, Hartford is clearly aware of the historical stream he occupies, coming off as both a devoted scholar and respectful practitioner. Where the liner notes feature rough recollections of where Hartford learned each tune and how the melodies might have evolved, the most convincing element is his storytelling on the disc itself. During most of the numbers, his warm and slightly gruff voice comes chortling out of the speakers, perpetually sounding as if it is going to deliver some dry punchline to a joke. The stories told are almost sung, capturing brief moments of spontaneous melodic memory, much like his solos on songs like "Wooliver's Money Musk," "Quail Is a Pretty Bird," "Green Corn," "Comin' Down From Denver on a Trip to Galway Here and There," "Devil's Hornpipe," and many others. Miraculously, Hartford's storytelling is never hokey or overtly self-conscious. Where the half-spoken interludes might seem an interruption on another artist's record, they seem perfectly in place here -- like a natural part of the song if one didn't know any better or listen any closer. As usual, he is backed by the Hartford Stringband, including Bob Carlin, Mike Compton, Larry Perkins, and Chris Sharp.
13
What's This
Advertisement