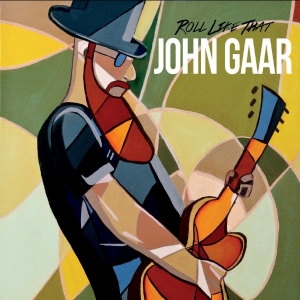 Glide Magazine Video Premiere of John Gaar's Roll Like That

John Gaar was born to carry on Southern musical tradition. He’s got the voice: part grit, part steam, and all soul. He’s got the backstory: he’s played funky zydeco in his native Louisiana, and smoking country blues rock in his adopted hometown of Austin, Texas. He’s got the brashness. And as you’ll see when you play the highly entertaining clip for “Roll Like That”, his latest single, he’s certainly got the beard.

Yes, Gaar looks the part, just like he sounds the part. He’s one hundred percent authentic – a fire-breathing, soul-shouting, hard-rocking true believer. He’s the kind of guy who’ll wear his Ernie Ball cap unironically; he lives and breathes music, and he’s proud to print his name on his guitar pick, just like his heroes did. Everything in his clip is vintage, and characteristic of American Southern music: the cars, the t-shirts, the guitars, the roadside shacks. This is Gaar’s home, and he’s welcoming you in with a smile.

The “Roll Like That” clip is shot, in part, at Riley’s, a legendary rural Austin area tavern that has been serving drinks and hosting music for generations. Riley’s was the first bar in Texas to sell alcohol after the repeal of prohibition (the building has been standing quite a bit longer than that!) and the party has been going strong ever since. It’s exactly the sort of place where a patron might expect to encounter a guy like Gaar, guitar in hand, ready to roar.

And because one Southern rock hotspot is never enough, John Gaar shows you another. The concert footage in the “Roll Like That” clip was captured at the Saxon Pub in South Austin, a thirty-year-old club with a classic look and a dedicated clientele that knows great music. Gaar is a regular at the Saxon and he fills out the stage with guitarists, percussionists, backing vocalists, and a full horn section. They’re having a blast – as is the crowd! – in that way that artists and fans do when they’re making the music they love in the place they’d never, ever want to leave.

Glide is thrilled to premiere the video for “Roll Like That” a throwback specialty that rekindles a musical lore of bluesy boogie and stunning simplicity. Gaar has a knack for evoking a joyous listen that is reminiscent of shades of Thorogood, Winter and Musselwhite.

John Gaar is a singer and songwriter with a passion for diverse rock music. John’s sound is extremely diverse, as his songs actually showcase a huge range of influences. From catchy pop rock, to gritty alternative textures, and everything in between.

The album features 11 tracks, including the funk-inspired opening number “Camellia”. This song channels the incredible showmanship of artists such as James Brown or Joe Cocker, making for a really special vibe.

The title track, “Roll Like That” has a really exciting electric blues vibe. This song makes me think of legends such as Joe Bonamassa or SRV, going for a really catchy and charismatic groove. There is also room for a country-inspired number – “Memphis” has a timeless sound, with huge, down-tuned acoustic guitars and minimalistic percussion elements. This song kind of makes me think of what would happen if Bruce Springsteen had decided to jam out with Lynyrd Synyrd!

All in all, this is an excellent rock album, boasting a wide range of styles and a stunning production.

Find out more about John Gaar, and don’t miss out on “Roll Like That.”