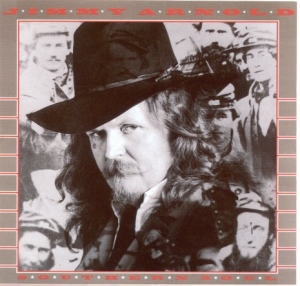 If ever there was a musician who embodied the image of free spirited independent “Mountain Man,” it was Virginia-born Jimmy Arnold. In his often wild, too short life (he passed away of a heart attack in 1992 at the age of 46) Arnold learned from legends and became one himself. He spent several years playing on the road with Charlie Moore’s Dixie Partners and Cliff Waldron’s New Shades of Grass but toward the end of his life he was performing mostly as a solo act, sometimes with Vassar Clements, Tex Logan or Mike Auldridge. He was fascinated by stories of the Civil War, and his years living in Fredericksburg, Virginia culminated in his masterpiece, Southern Soul, a strongly evocative homage to the Civil War South and considered by many to be one of the all-time classic concept albums.

Southern Soul marked Arnold’s debut as a vocalist and as a fine writer of more than just instrumentals. Familiar tunes such as Charlie Moore’s “Legend of the Rebel Soldier” and The Band’s “The Night They Drove Old Dixie Down” were balanced nicely alongside of Arnold originals such as “Jesse James,” “Heroes,” “Georgia Moon,” “The Dixon Line,” and others. Several songs, including “My Home’s Across the Blue Ridge Mountains,” were given new and/or additional lyrics to make them more Civil War-friendly. Instrumentally, Jimmy shone on tunes such as “Sail Away Ladies,” “Southern Comfort,” and “Bonaparte’s Retreat.”

Jimmy Arnold, the doggone way he is, takes us back to a time just after the War Between The States when those few boys who earlier had saddled their horses just to save Old Dixieland and who hadn't already returned home in a pine box, walked back through the mountains, each with dreams of their own Lorena. A soldier's joy was stirred with a fiddle and banjo on the journey back across the Blue Ridge Mountains. There was plenty of time to pick long breaks between verses of the songs he sang from the ridge tops. This almost psychic album by Jimmy Arnold comes clear more through research of the soul rather than research in a library and transcends mere arrangements and licks. Have a little Peach Brandy and let's go for a walk with Jimmy Arnold from Fredericksburg to Grayson County, the doggone way he is.
-John Hartford

Jimmy Arnold is one of the most versatile musicians I have ever worked with. When I first met him he was just a kid playing "banjer" with the great fiddler, Joe Greene, who undoubtedly imparted some of his hard-driving spirit to Jimmy's music. Since then he has become a virtuoso as well on the guitar and fiddle (why does everyone want to play the fiddle?), pouring his soul and energy through the strings of all three. Also, Jimmy is one of the most colorful (both figuratively and literally) characters I have ever met. His natural charisma enhances his musical talent, adding another dimension to his live performances. Here Jimmy displays, for the first time on record, his vocal talent in this collection of original ballads on a subject dear to his heart - (the history books may have read different if Jimmy had been there.)
-Tex Logan