Jimmie Dale Gilmore -Come On Back 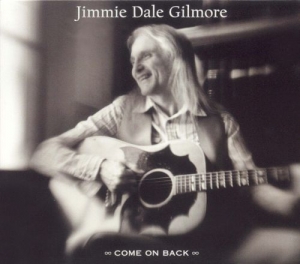 Jimmie Dale Gilmore's first two albums were high-spirited honky tonk sessions that owed more to the great Texas dance hall tradition than the Zen cowboy leanings of Gilmore's masterpiece, 1991's After Awhile. To many listeners it probably seemed that the latter album was a more personal and heartfelt project than his earlier sides -- but then again, maybe it wasn't.

Come on Back, Gilmore's seventh solo album, is a set of covers very much in the spirit of his debut set, Fair and Square, but a reading of Gilmore's liner notes offers a wealth of perspective on what these songs mean to him. Come on Back was recorded in tribute to Jimmie Dale's late father, Brian Gilmore, an amateur guitar picker who, as his son puts it, "accorded one class of people an exalted level of esteem that bordered on reverence" -- musicians and songwriters. Brian Gilmore loved the great country songs of the 1940s and '50s, which Jimmie Dale describes as "simple, well-crafted, unpretentious little gems from a wonderfully creative period in American commercial music." And while Jimmie Dale Gilmore may not have written a note of music on Come on Back, his performances of these songs, which speak clearly of the complexities of life and love as expressed in simple but eloquent terms, never fail to hit the proper grace note.

This disc's many lovely moments document not just how Gilmore's love for this music was passed on to him by his father, but how the lessons he learned from his family are reflected in the home truths of these tunes. None of this is to suggest that Come on Back is a dark, or morbid record; the joy in this music is palpable, Gilmore is in superb voice on these sessions, and Joe Ely's production is as fine as it is unobtrusive. Though he's a gifted songwriter, Gilmore has always been a fine interpretive singer as well, and the full depth of his vocal talent is on display on Come on Back -- without reading his deeply moving liner notes, this sounds like an excellent collection of classic country and folk standards. Listen again after reading his essay, and you hear a tribute to a life well lived, and the many ways his father's life shaped his own. Come on Back is a quietly extraordinary album, and Gilmore's finest work since After Awhile.
22
What's This
Advertisement