Jim and Lynna Woolsey-Walk Into The Water 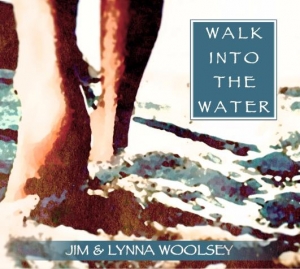 Introducing two of the most talented, ear-pleasing and heart-warming singer-songwriters bluegrass Americana and folk music has to offer, Jim and Lynna Woolsey. If they haven't graced your radio dial or a stage near you with their incredible organic sound yet, trust me, there is no time to lose.

Since introducing their first CD The Road That Brings You Home back in 2014, they have graced the airwaves with four more musical projects including; Heart and Soul, Blood and Bone, Long Ago, The Fall and their newly released Walk Into The Water.
This songwriting dynamic duo doesn’t hold back on any aspect of this beautiful new project, Walk Into The Water. Their traditional award-winning vocals bring their songs to life. Jim offers a baritone blusey sound . While Lynna adds depth with her rich honed harmonies. Their distinctive blends remind fans why this duo is quickly beciming a household name.

“Jim and Lynna Woolsey have made a beautiful recording. Debuting their thoughts, family stories, honest emotions, true grit and heart, They tell the tales a few minutes at a time. A few minutes is all it takes to fall in love with their music.”
—Randy Kohrs

“Jim and Lynna Woolsey are two of my favorite songwriters and singers-and a vital part of the Woodsong Farm Writers Community for two years. They have more than talent and determination. They have that magical quality of being tuned in to real life, attention to the small stuff, and open heartedness that makes for great songs, and great friends.”
— Louisa Branscomb

"The songwriting, musical creativity, guest artists and performances of these original songs is refreshing and powerful. I hope you enjoy the journey you’re about to take with Jim and Lynna as much as I do.”
— Mike Sumner

In 2018, during the IBMA festivities in Raleigh, NC, Jim and Lynna Woolsey signed their first professional recording contract with Bonfire Recording Company, the "sister" label to Pinecastle Records. Bonfire released Jim and Lynna’s debut project for them in April 2019 titled, LONG AGO. The new project once again showcased the incredible songwriting talent and strong vocals that the husband and wife duo deliver. Never standing idle, this duo wrote a book, The Fall along with a companion CD.

Jim and Lynna travel with a full band of great professional musicians from their region in the great bluegrass state of Indiana! The band includes: Jim Woolsey, lead guitar/lead vocal, Lynna Woolsey, rhythm guitar/lead vocal, David Foster, bass/lead and harmony vocal, Mike Curtis, resonator guitar, and Brian Lever, banjo. Their artistic maturity grace this CD with their incredible musical talents.
“It is such a pleasure to have our band recording with us. They are always ready not only to tour with us, but go into the studio and record as well. We are so blessed to have some of the best musicians and friends around. These guys have went above and beyond to make sure the music gets out there and sounds great. Whether it’s at a local performance, bluegrass festival or on a track in the studio, these guys put their hearts into the music. That’s what makes this blend so special!”
—Jim Woolsey

Born into a family of musicians, Jim began playing with the popular local band, The Patoka Valley Boys when he was just fifteen years old. Soon after, he and Lynna met and married, and she also started playing and singing in the same band.

Both Jim and Lynna have won various bluegrass awards for Old Time Vocals, Guitar, Mandolin as well as many band titles. Through it all, the Woolsey's have remained grounded and close to their community, family and their church.